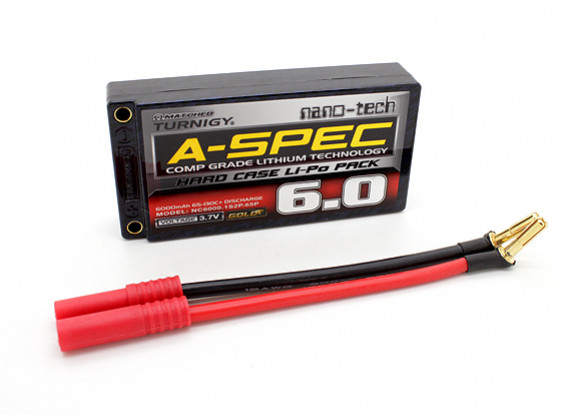 You will earn 24 bonus points for buying this item.

The A-SPEC packs have the most stable consistent formula yet giving you peak performance without sacrificing reliability. Featuring gold plated balance leads, silver plated discharge wires and an CNT (carbon nano tube) additives mixed into the electrodes, these batteries are simply unmatched by any other in performance and build quality! The new CNT/electrode mixture reduces impedance, generating less heat and maintaining a higher voltage under discharge load. Basically what this means is that these batteries will provide more power in your machine especially during high current draw manoeuvres, and they will provide a longer cycle life due to the lower operating temperatures of the pack.

For those that love graphs, it means a straighter, longer curve. For racers it spells stronger throttle punches and unreal performance. Unfortunately with other big brands; numbers, ratings and graphs can be fudged. Rest assured, TURNIGY nano-techs are the real deal, delivering unparalleled performance!

This improves the ability of ion transmission and ion diffusion. Through improving electronic conductivity and ion transmission, the impedance is reduced and the polarization of high rate discharge decreases greatly.

Can't beat the value of these. bang for the buck? right here

Great Product, bought 2 of these and waiting for them to come back in stock so I can order more, Don't lose much punch when used in quick succession after racing, (I allow about half hour before recharging) Using in GT12 class.

Only 2 mom of resistence !