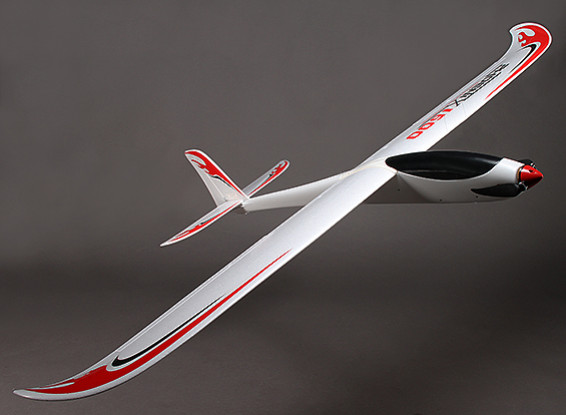 You will earn 67 bonus points for buying this item.

This 1600mm wingspan glider is quick to assemble and lasts a lifetime! The wings and tail are made from tough EPO foam. However, the fuselage is made from a really strong blow molded nylon skin with plywood formers, making it almost indestructible. Usually reserved for baby toys*. The virtually indestructible fuselage is smooth and rigid yet still light enough for the glider to perform. Both the main wing and tail are screwed into place and the two wing halves have a carbon fiber rod for added strength. The main wing includes 1 servo per aileron for strong control surface movement plus there is a pre-molded slot so you can add your own flaps later. All 4 9g servos, speed controller and brushless outrunner are included. Just add your own receiver and battery to be flight ready! This really is a super strong glider that takes 15 minutes to put together.

*Having a blow molded fuselage on a glider is an excellent solution however it is not popular amongst manufacturers due to its high cost, effectively doubling molding costs.

Its ok for biginer

Fun glider that handles really well. Not a quick build, but really, what's the hurry. Efficient on 2200 2S, with relatively decent power and climb rate. Many fight option available with full flaps. This is a great platform to work from. Enjoy!

Tough fuse! Easy to set up and transport.

I am very happy that I chose this model, it is big, effective and durable.

I was pleasantly surprised to find that flap servos were installed, so in total 6 servos are included. The only small complaint would be the linkages, a bit flimsy and also too long for use with the flaps. I removed the 40g ballast from under the battery tray. Unfortunately, I still need 20g of lead in the front with the 2S 1800mAh pushed all the way forward, could have used a 2200mAh instead. For the maiden I changed the prop to 9x6 because I had read about the motor burning out. Climb out was a bit weak so I will probably change back to the stock 10x6. Over all very happy with it, I plan to change wing mount to rubber bands which will be more forgiving for slope flying.

Its best glider for biginer

This is my second one,first flew real good,both LOS and simple fpv.
Been waiting for them to come back in the UK for yrs..I bought the pnp version with servos etc but swapped the stock motor for a Sunnysky 2216 1250kv which the Sunny motor shaft fitted perfect on the stock plastic spinner,runs great on a Nanaotech 1800 2cell lipo.
The first one i bought a good few yrs ago had servos installed and worked great with hundreds of flights so expect the same servos to be ok on my new one.Using the stock esc which came with it and the brake for the folding prop was already on so another bonus,but wouldn't have been hard to program if not..

had one a few yrs ago and was my favourite plane,fitted an easy removable fpv setup too.Bought another when they recently came back in stock in the UK.Simply great fliers,solid in the wind and super easy to launch and fly..