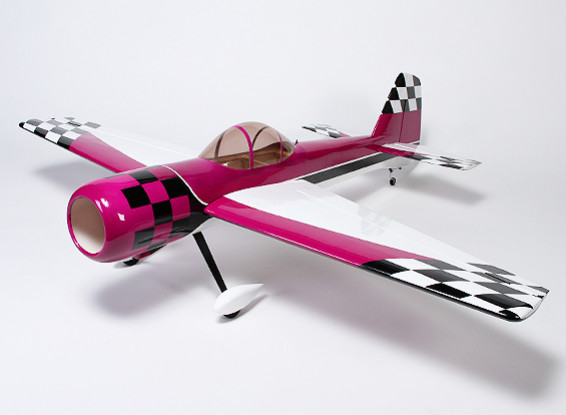 You will earn 133 bonus points for buying this item.

The Yak 55 design was a entirely ground up design, radically departing in design from its predecessor, the Yak 50. It was designed to match the tight, low-speed style of Western aircraft, as seen during the 1976 World Aerobatic Championships.

The resulting design, the Yakovlev Yak-55, was a single-engined all-metal cantilever monoplane. The pilot sits in an enclosed cockpit between the aircraft's thick, fully symetrical mid-mounted wing. The powerplant is the same 360 horsepower Vedeneyev M14P engine, as used by the Yak-50. For simplicity, the Yak 55 has a fixed undercarriage with titanium sprung main gear and tailwheel.

The prototype Yak-55 first flew in May 1981 was displayed (but did not compete) at the 1982 World Aerobatic Championships. By this time, fashions in aerobatic flying had changed, with the high energy aerobatics demonstrated by the Yak-50 back in fashion, leading to the Yak-55 being rejected by the Soviet team. The Yak-55 was therefore redesigned with new shorter span, reduced area wings and a thinner but still symmetrical airfoil section, giving an increased rate of roll and speed. The Soviet aerobatic team first used the aircraft in 1984 when they won the World Aerobatic Championship.

In the late 1980s, work began on a revised version of the Yak-55, the Yak-55M, to meet demands from DOSAAF for an aircraft with further increased rates of roll, and to compete with new designs from the Sukhoi design bureau. The Yak-55M had a still smaller wing which resulted in the required improvement in roll-rate. It first flew in May 1989, entering production in 1990.

Our Yak 55M arrives almost ready to fly with just final assembly and equipment installation required. The all balsa airframe is strong enough to take a nitro engine, yet light enough for electric conversion. What really sets off this model is the multi color covering scheme that is topped off with pre-painted fiberglass cowl and wheel pants.

In aerobatics, precision counts. That is why we have included a complete hardware package that features heavy duty control horns, servo arm extensions, pull pull cables for the rudder, and ball links for all surfaces. A large access hatch on the fuselage allows you to access electronics, check your fuel tank, or swap out batteries if converted to electric.

Flying the Yak 55M is dream. The light weight construction yields a low wing loading. The large airfoiled tail surfaces make the Yak 55M dance about the skies with precision. Rugged aluminum tail dragger landing gear allows you to operate off of rougher runways without issue. With all of the great features we've packed into this model, the Yak 55M will quickly become one of your favorites!

I am impressed by the quality,
I'm starting to assemble later this week.
engine becomes the ASP 61 should be enough power
I will return when I have started the installation.
the only thing I saw now was that the cover did not fit in with the color of the upholstery

Got mine about a a week ago, finished building it now. Unlike Sid232, I opted to run only one elevator servo and had to use the optional elevator joiner. A little bit fiddely to get done right, but not very hard if you got some builders experience.

The rest of the airframe went together reasonable well and as far as I could see, there's really no need to go over all the glue joints as they seem reasonable glued. The wing bots might become an issue though, and just like Sid232 I plan on changing them for a tad more beefy ones.

I opted for the G60 with Yep 80A esc running 6s3300 JackPower lipo's to be on the light side, but it looks like I might be a bit tail heavy without extra weight in the front. Possible I'll use a 2sLiFE to power radio gear (Spektrum 7100 receiver, 4 x PowerHD 1201MG servos) strapped to the motor box to balance it out.

The colors are a bit off compared to the picture and the cowling and canopy doesn't match the pink 100pcnt but I'll live with that. I'll do an update when I've flown it, probable this weekend :)

Well received it today and glad to be the first one to write a review. This will be a review about what is in box and a second review after test flight will be posted.

First color differs as in pics, i was expecting a funky hot pink but is actually more a candy purple which is ok tho, overall quality is fairly good, covering is great and paint job is acceptable. Comes with a CD manual, all hardware, servo clips and electric motor adapter, wheels look small for grass (2 inch) so will replace for 3 inch ones. To keep the plane within budget my set up will be as follows.

Overall so far happy with product, is a different plane compared to the usual ones around, size id good and looks amazing, i hope i can find some nice decals for it since the included ones are a joke, the only weak point so far for me are the thumb screws for the wings, they are very small in diameter and weak plastic, i will replace for hex metal ones as for 3d wings will be stressed hard.

will start assembling and a flight review will b