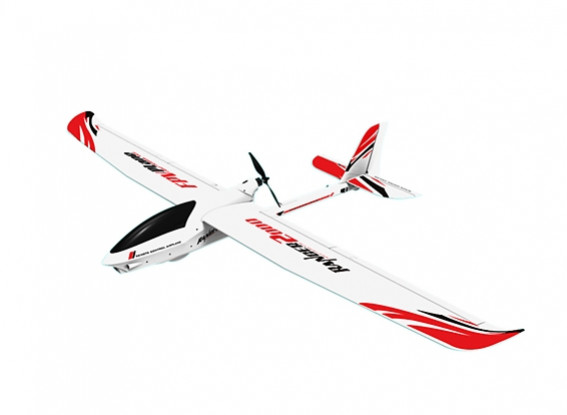 You will earn 110 bonus points for buying this item.

The Ranger 2000 is easy to assemble and features a large wingspan for stability in the air. The wings are fitted with two spars to strengthen the wings and they are attached using fast connecting wing clips to join the wings into the fuselage. After flying, simply squeeze the clips to release the wings and easily store the plane in your car. The fuselage has the capacity for an FPV camera and related components.

The plug-and-fly plane is a single-body aircraft with a plastic fuselage that offers flexible, lightweight protection in case of crash landings. At the front of the fuselage, a pre-cut hole gives you the option of adding an FPV camera. The position puts you right in the pilot's seat without having to cut into the sturdy body of the plane yourself.

Remove the black canopy to reveal a flatbed for mounting different cameras, transforming your glider into the perfect FPV model or videography vehicle. Glide through the air with this AMAZING electric-powered glider that's perfect for weekend flying.

The Ranger2000 needs a good push on throwing but once going it flies great. The canopy was tricky getting it off the first time as it has small pegs that attach it and you need to pull outwards - starting at the rear corners is best.The plastic fuselage makes the plane very durable - asphalt does wear on it though even with smooth landings.

Good looking model let down by some quality issues. The canopy does not clip in at the sides. Had to be heated to get it to fit. Servos not secured properly either. Poor attention to important details otherwise ok. Fake wheel underside moulding should be an actual wheel. Would be more functional 4 sure. Check everything before you even attempt to setup to fly.

The box arrived after being shipped through 4 airports on a strange routing by Fedex, everything was fine no damages, it was well packed, and well secured inside.
Assembly was simple, add the servo arms, links and control horns. I should mention here that the control horns were not the screw in variety mentioned in write ups, but had changed to a click in place type, which at first glance I wondered if they would be strong enough, I fitted a couple and did a pull test as much as I could and found that if I put anymore pull I would break the foam before the the horn gave way, so perfectly adequate for the job. Although I will mention that the legs that go through the foam were a little on the short side for the rudder which is much thicker than the others and required a lot of pressure to make the stop plate click into place.
The Servo's are nylon gears, metal are generally preferred these days, but since we used nylon back in the day without real issues, they were fine for me, and all were well installed and tested fine.
With a 2200mAh battery, a little weight is required to balance properly with the battery pushed as far into the nose as possible, a 3300 balanced the model spot on, however since I have a lot of 2200's I decided to go with those and use 2 at a time, which also works great and gives me longer flight times.
I maidened the plane on a slope, on a totally calm day, so had to fly with the prop running at between 40-50% all the time. I needed a couple of clicks of down, and one click of left aileron to set it up. I found that the ailerons were not very responsive at low speeds, better to use rudder control, I will adjust them for more up than down before going out again. This will be a mechanical adjustment rather than change out the Y leads, which will be simpler. At higher flight speeds there was plenty of aileron, so unless you want to do a bit of thermaling (which I did), there is no real need. This plane is virtually stall proof, it just drops the nose picks up some speed and levels off, no bad tendencies at all, it also doesn't tip stall at all, a very easy plane to fly all around.
I will mention here that a main concern for me is that where I live there are no grass areas to land and everthing is rubble or stony, so a big thing for me was the strong plastic fuselage, which after three flights with the first landing being heavy and not where I wanted at all on some very stony ground, the fuslage lived up to billing with hardly a scratch.
Overall a great model,is a very stable platform if you want to FPV, or if you want a first aileron glider to slope soar an excellent choice, or just for general messing about and versatility, good plug in system for the wings, dump it in the car, no messing with screws etc, just plug in the wings and fly!

This plane is easy to assemble without the need of glue. It has calm and rather slow flight characteristics and is a by that a very good camera platform. The ability to glide with the need of very little power offers a long flying time. The propeller thoug slows down the plane while gliding without power, a folding pusher prop made it much better. I`m using 3s 4000mAh lipos, the flying time with the help of thermals can be more than one hour up to endless, depending on how patient your neck is. Landing is easy with the four flap wings, can be done without flaps thoug. I'm very happy for what I received for that little money, I guess it is a good plane for beginners too.

This model is awful compared to the smaller versions.
List of issues i had with the model:
1) Prop adapter is too large for the motor (lucky i had one that fitted)
2)Screws missing in the motor housing.
3)Tailplane retaining bracket had 2 out of the 4 mounts broken off.
4)Instructions out of date.
I just hope this flies...!!!!!!

The Ranger 2000mm is a nice easy to fly glider that floats on the thermals once you get the C.G. set, it tends to be a bit tail heavy with a 3s 2200mah. Launching from the ground(grass) is preferable than to hand launching and a breeze.

This is my first glider/powered glider.
I'm impressed with it.
Landing it is a bit of a challenge as it glids for a long length before landing.
Nice aircraft and cheap for the size!

This model is POS !!!!! HARDWARE IS CRAP!!! DONT WASTE YOUR MONEY FOR THIS PLANE.

Not impressed with no prop but and Cannot even buy one from hobby king .