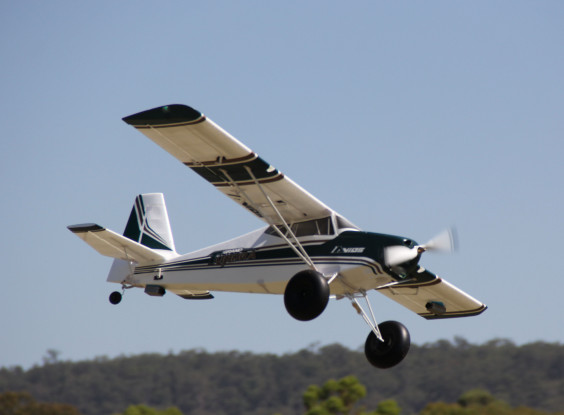 You will earn 279 bonus points for buying this item.

The Durafly Tundra has a massive cult following within the RC community and rightfully so as It's easily one of the best flying models on the market with an impressive flight envelope. The overwhelming success of the Tundra fueled our ambition to design a larger version of the Durafly Tundra. Following in the footsteps of its smaller cousin, the Grand Tundra encompasses all your favorite features but on a larger scale.

Enjoy short take-off and landings with huge 90-degree flaps, wing vortex generators, large tundra wheels, optional floats, navigation lights and much more. The Grand Tundra happily flies on 4S, however, on 6S you'll realize there is another side to the GT. This is when the GT comes to life as it's no ordinary PNF model. If you have never tried skis or floats then this plane is for you and its something that everyone must try as there is nothing like landing or taking off on water. Note: Floats and Skis are optional.

The Grand Tundra is an impressive RC aircraft with a huge presence in the air. The wide flight envelope makes for a very forgiving aircraft giving you the confidence to challenge yourself. From slow flight through to fast aerobatics, the Grand Tundra does it all with such finesse. Featuring metal gear servos, ball-linked control rods, glider tow point and navigational lights - Attach your camera to the FPV cockpit tray to put yourself in the driver's seat for a truly epic ride.

Re- visit to the Grand Tundra

Well, Guy's it really is a good plane but, It is way overpriced for a foamy. you can buy bigger and better planes for less. I have owned the GT and flown it since Nov 2018, never crashed though there have been a little rough landing or 2, but it is just not worth the money they are asking. So seriously look at what else is out there 1st and spend your hard earned money more wisely.

Plane was very good but broke the fragile ends on the wing spars on my first rough landing and am having great difficulty obtaining spares.

This is a great plane, so much that I purchased another one before it is discounted.

I love this plane.

This is my second Grand Tundra. There is nothing wrong with my first one, but it is starting to have a LOT of hours on it. I just wanted to be sure I had one when and if I ever needed it (and would be able to get it). It is a hoot to fly. Whether I want to fly smooth and scale, or ramp it for responsive aerobatics, this is my "go to" plane. Now, I can fly my first one like I stole it!

No parts for months

Wing and tail struts out of stock for months. Sad because I liked this plane but am now very reluctant to purchase another Avios product. Been waiting for months thinking surely they would restock such a simple item but no luck. I guess they don't care to stock these items.

it took me 2 year to make up my mind to buy this plane wot a super plane it is i run it on a Turnigy H/D 6s 5000mah/ 15x8 prop, I removed the esc and fitted a Plush 80 esc as I did not want lightning and reverse i just love flying this plane

a pity that there is no electrical connection diagram

Great plane, but they don't use glue!!!

not everything is fitting and they only use 2 drops of glue for everything. I knew that this might be a problem (see other reviews on the internet) and re-glued everything where this was possible .... but on the 2nd flight the wooden battery plate came loose and guess what happens if the cg is shifting from front to left to the sides? ... it crashed and you can't do anything about.
It definitely was my last plane from Avios ... even the 1,3m Tundra had better quality.