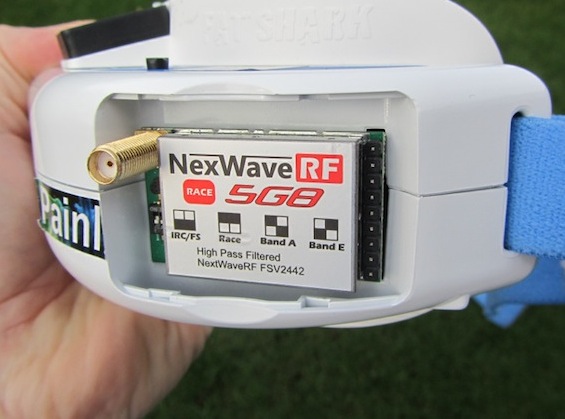 In this article, we explore what RaceBand is, why we need it, and why it was introduced. Don’t understand what it is all about – read on.

To first understand what RaceBand is and why we need it, it is useful to look at the traditional way that 5.8Ghz FPV systems work. The frequencies we have available to us in the 5.8Ghz band for FPV flying are divided into groups and channels for ease of use. There are 32 channels in total, 8 in each of the 4 groups.

To get your video receiver working with your video transmitter you needed to make sure that both were set to the same band and channel.

As the frequencies are allocated across the bands it allows you and a friend to use the same equipment and still fly together. If both were using FatShark and one used Band F, Channel 1, and the other used B and F Channel 8 then there was enough separation in the frequencies used so that both could see their own images clearly and not cause any interference with the other's view.

With the introduction of 32 channel receivers and transmitters, the limitations were further reduced and allowed for pilots to use any of the Bands and Channels that worked for them.

The challenge came with the recent explosion of 250 class quad racing.

If some pilots could only use one Band, others had 32 channels and others had problems using certain frequencies then trying to get every pilot a frequency that worked was becoming very difficult. The problem was further complicated by the need to have a wide separation between the frequencies as possible. Not enough separation and video transmitters interfered with each other and impacted the pilot’s ability to see clearly. Many agreed that 6 pilots were the maximum that you could fly safely using these 32 channels.

The answer to these problems is RaceBand.

RaceBand is a way for up to 8 pilots to fly at once and have each of the channels separated by enough to make sure that every pilot gets a good picture with the minimum interference during a race.

Organizing an FPV race is far simpler with RaceBand. Race organizers no longer have to juggle the allocations of 32 channels and the ability of a pilot's FPV receiver but simply allocated one of the 8 RaceBand channels to each pilot.

Not if you are looking to fly as part of the hobby or with a few friends. The existing equipment has enough separation on all of the bands to allow a small group to fly and manage their frequencies together.

However, if you are planning to fly in races this year then you may do. It is worth checking with your FPV Race organizers well in advance to understand their requirements for FPV transmitters and receivers and make sure you arrive with the right equipment!

What Makes A Good Aerobatic Plane

Quanum Genesis: The Wait is Over
Blog