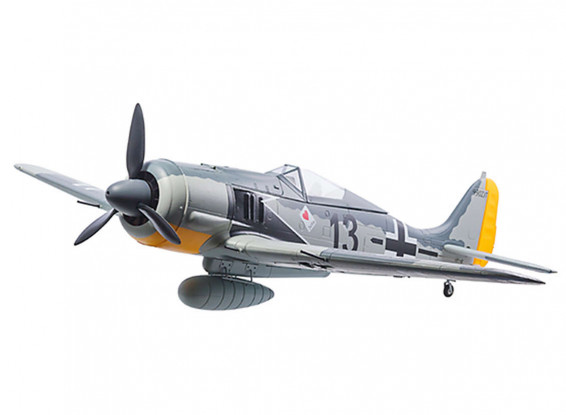 You will earn 224 bonus points for buying this item.

The H-King Focke Wulf FW-190 is molded in all EPO foam and has a host of features that will make any scale enthusiast happy. Arriving in a plug and fly configuration, minimal work is required to get the FW-190 into the air. We have done the difficult work of installing the motor, servos, retracts, and even LED lights for you. Simply complete the final assembly, program your radio, and fly. Scale details include retractable landing gear like any good warbird should have, a sliding canopy, a faux machine gun, and other scale parts. The working split flaps have been updated. The scale 3 blade propeller rounds out the authentically look of the model.

The Focke-Wulf FW 190 Shrike or Butcher Bird was a German single-seat, single-engine fighter aircraft designed by Kurt Tank in the late 1930s and widely used during World War II. Powered by a radial engine in most versions, the Fw 190 had ample power and was able to lift larger loads than the Messerschmitt Bf 109. The Fw 190 was used by the Luftwaffe in a wide variety of roles, including day fighter, fighter-bomber, ground-attack aircraft, and to a lesser degree, night fighter. The Fw 190 was well-liked by its pilots. Some of the Luftwaffe's most successful fighter aces claimed a great many of their kills while flying it, including Otto Kittel, Walter Nowotny, and Erich Rudorffer.

Be sure to check out the H-King Focke Wulf FW-190 today.

Well i was dubious buying this bird as i fly glo and gas, How wrong was i.
Despite no instructions( i found it relatively easy to assemble) and very little information on set up it ended up fantastic to fly. Smooth in the air with no bad vices. Quality of kit is so so and the retracts are very weak on installation. A light landing on grass saw me rip out my left wheel. Very little glue on the plastic insert and not a lot of damage so a generous amount of glue and repair done.

Plane fly's well very scale like. Retracts and all electronics work well. I added a BEC just cause I like to use them on my planes. Will be installing a stabilization receiver in the future. The plane is light and not super fast so it does get balanced around slightly in the sky when windy. I did glue the wing together and also glued the tail feathers on, used wood glue for easy cleanup. Best to have prior building experience with this model when it comes to the instructions they are very basic and tell you the control throws and CG, not much else.

Plane looks amazing and flies excellent.
I made a few modifications to the plane as I built and that was remove the foam hinges on the elevator and ailerons and replace with proper nylon hinges. I also glued the rear tail section to the plane as I secured the two bolts supplied in the kit to ensure proper support and no chance of tail ever pulling out of plane.
Radio instillation was simple and everything worked as it should. Plane required 1/2 oz of weight in the front of the cowl area to balance out with my 4000mah packs. I will remove once I get my 5000mah packs.
Very Happy Customer and plan to order a second one soon,
Paul

Went together with ease and had no issues during assembly. Once it’s up in the air it flew awesome with no surprises. Really enjoy flying this aircraft and you get a lot of plane for the money. Great job HK you knocked it outta the park

Do not test retracts without voltage regulator. BURNED UP>

Love everythig about the plane except NO INSTRUCTIONS included with the kit! I just don't get it. Found lot's f help after burning up my super spindly landing gear.

Looks great on the ground and in the air. Fly’s really nicely without any vices once trimmed up. I use a 6 cell 5000 battery and get 16 min flight times. Strong wide landing gear make for good landings. I generally don’t like foamies but will make an exemption for this model. My only gripe is that hobbyking do not supply the spinner hub as a spare. If this part cracks the propeller will not run true any more and glueing doesn’t work. I made an aluminium round plate to bolt to the front of the hub/prop assy to pull the blades back in line which worked well.
Really like this plane. Not a beginners choice, but great for intermediates.

The finish is excellent being new to RC planes I wish it had assembly instructions. Especially with the retract wiring.

Great plane, flies very well. Elevator came lose on third flight. But as it is such a great plane to fly I may get another one and fit proper hinges on all surfaces. Just a pity HK did not fit plastic hinges .