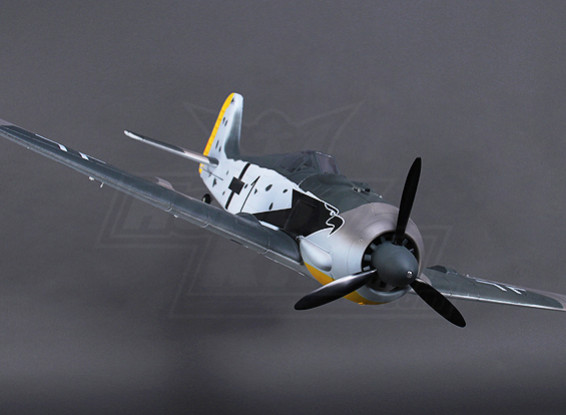 You will earn 128 bonus points for buying this item.

When the FW190 first appeared in the sky's over France in 1941, it proved to be a shock to the RAF, totally outclassing the Spitfire Mk V. The radial engined fighter was totally at odd's with European thinking of the time, radials were considered to be inferior to liquid cooled "in-line" engines due to excess drag, the FW190 quickly made engineers re-think this idea. When a FW190 was accidentally landed intact in England by a rather lost Luftwaffe pilot, British engineers & test pilots were given the chance to study it extensively, the 190 was found to be highly advanced in many respects and many of it's features were to find their way into later Allied aircraft.

This great looking FW190 is made from tough EPO foam and is superbly finished in the color scheme of Christophe Jacquards Flug Werk 190. The main wing is carbon re-inforced and is also removable for easy transportation, the wing features navigation lights & split flaps and all servo's have been pre-installed. The brushless outrunner motor, ESC and servo's have also been pre-installed into the fuselage, as has the sequencer to operate the under-carriage doors. One of the really outstanding features of this FW190 is the superbly manufactured battery hatch compartment, likewise the very scale spinner with realistic cooling fan. The long under-carriage legs of the FW190 can make for nasty ground handling on grass surfaces, so a compromise was made for ease of use and reliability by shortening the leg's, this does not detract at all from the lovely scale look of this nice size Warbird once it is flying.

This superb looking FW190 is a joy to fly, it has tons of presence and a nice scale outline, it is well designed and robustly constructed, looking and flying like a much larger and much more expensive warbird. With it's undoubted quality, superb flying characteristics, scale looks, robustness and great price, this lovely FW190 should be a welcome addition to any Warbird enthusiasts hanger!

Excellent plane, and an outstanding value. My only nits were that the instructions did not list any recommended control throws for the flight surfaces, the rudder is a bit thick where it meets the fuselage, and the delayed gear covers sometimes don't synchronize correctly. However, the quality of the model is really very nice, and assembly is super easy. You should check the set screw that holds the motor on the shaft. Mine came a little loose after the first couple of flights, but no damage, and it was an easy fix. This is a fantastic looking model in the air with the paint scheme and the flashing LED wing lights. Good power from a 2800mAH Zippy 3S pack, and easily went 6 minutes with 3.74v per cell left. The plane is very stable, and easy to land with the included flaps. Loops, rolls, split S, all the usual war bird maneuvers are easy. For a full house plane with flaps, lights, and retracts, this is a super deal at 129.00! I would definitely recommend this one.

This is a beautiful and we'll built craft, I've mated it to a Spektrum AR636 and flies incredibly stable I only gave 4 stars on the quality since I cannot truly determine how it will do in time, however it is hefty and well made.

Very soft retracts(2.5mm) and small wheels make it usable only on a hard runway, NOT usable on Grass!!

Next to the vampire this is the best model I have purchased from HK. It is very stable, flies nice and slow with flaps down or 1/2 down, or fast fly with flaps up. landings are easy. the paint finish is very good, retracts are good but more delay on landing gear doors closing would be good. I will fit gun sound and light effects next job

for the price this is an awesome warbird and really a pleasure to fly!

the manual it comes with is really horrible! :)
it has only one side on the assembly and lacks lots of vital infomation!
so i made a short video that shows everything the manual is missing:
www.youtube.com/watch?v=mebqGJmsD2o

Just got everything set up. Retracts were getting stuck and hopefully this will help anyone who just bought this plane to avoid this. The doors that close over the wheels have one servo that operates using a gear function and the rats nest of wires that are located right by the servo can easily get chewed up and snagged. Wire management is very important, especially if you hook up the lights (even more wires!). When you attach the wing and feed through the wires, pay attention to where that gear is and avoid it, tape the wires or zip tie them away. One problem I can't figure out is one wheel will snag the door when it's being retracted. It happens about 1 out of 3 times. Not a big deal, but I would like to fix it.

Arrived well packaged with no transit damage. There are a few minor niggles regarding the construction. No lead locks on any 2 way servo leads, easily rectified. The leads are not long enough so making it a struggle to fit wing to fuz without getting anything caught. Cheap plastic clevis on gear door broke after about 10 cycles. The pushrods are an odd thread. I will probably replace them after the "stock" maiden flight. As yet unflown. I will report back once done.