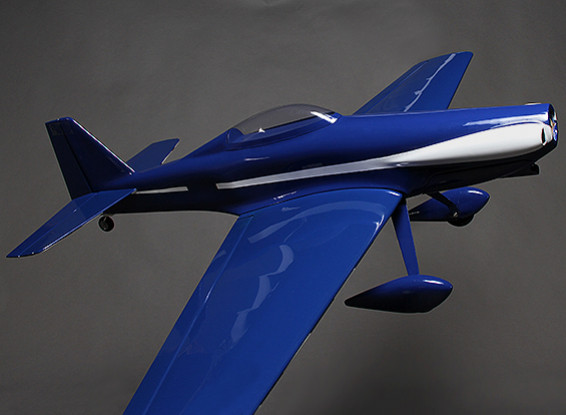 You will earn 42 bonus points for buying this item.

The Cosmic Wind was designed and built by Lockheed's chief test pilot, Tony LeVier, and a group of Lockheed engineers. A very small single-seat racer, it was aimed at the Goodyear Trophy for Formula 1 class racers initiated in the US soon after World War II. It is an all-metal low-wing cantilever monoplane. Wings and tail surfaces are all straight-edged and tapered. The ailerons are full span and carry trim tabs, as does the full-fin-depth rudder. The undercarriage is fixed, with streamlined main legs and wheels in long fairings. The roller tailwheel is tucked into the rear corner of the fuselage behind the rudder. The cockpit is enclosed with a small, single-piece, perspex canopy. The first aircraft were powered by 85 hp (63 kW) Continental C-85 horizontally opposed engines but more recently at least four have used the 100 hp (75 kW) Continental O-200-A. The engine installation includes a large pointed spinner and long, bulbous cylinder head/exhaust fairings. Three Cosmic Winds were built at Lockheed's between 1947 and 1948 and a fourth rather later, a fifth was also built in the US by amateur constructors, the last example was built in the UK as late as 1972.

The Hobbyking Cosmic Wind is an elegant and fast looking example with a high quality glass fiber fuselage, with balsa and lite ply built up wing construction. All parts have been beautifully CNC cut which makes for a very strong light airframe. A large glass fiber battery access hatch located under the nose is magnetically attached which allows plenty of room for your chosen battery. The undercarriage is an all metal double leaf type with glass fiber wheel pants. There is a sturdy motor mount in the nose allowing secure fixing of your chosen 35mm motor. The Cosmic Wind requires some construction work, the horns and control surfaces require fitting and also the tail sections and ailerons require glueing into place and of course the motor and R/C equipment need installing but 2 or 3 evenings of work should see the Cosmic Wind on the starting line for your very own Goodyear Trophy race.
Assembly at the airfield is very quick and simple, the joined wings bolt in place with pegs on the leading edge to ensure a tight fit. All in all a very nice easy to construct and fly scale model which will be admired on any model flying field.

Nice plane. Quite small and I intend to add an orange flash made of monokote on the top surface of one wing.

Take note of the location of the wing retention nuts - in mine, the ply was delaminated.

Correct: Fuselage fiberglass is NOT the thinnest so it will take the speed of this plane.

I gave 4 starts for overall, 5 starts for value of the low cost, 3 for quality. If screws holes are pre-drilled, magnets are install properly, hinges are pre-install it will get 5 starts.

The four magnets that hold the battery hatch cover were installed behind fiber glass (not on the surface, two pairs of magnets are not touching or close to each other), so the holding force is much weaker, without any improvement it will falls during flights in a matter of time.
Has to cut the pre-cut canopy to the right size before gluing.
Little decals to apply, the bottom of the wind and stabilizer are black and white checker flag pattern.
My final weight is 36oz instead of 30oz GP. Or 630g without motor, ESC, battery and no prop/spinner.
A big killer for vertical performance.
Tips: Make sure the elevator joiner wire is installed BEFORE securing the two elevators to the stabilizer.
As GP instruction, using 30 minutes epoxy is a good choice to secure the elevator as it will give enough time for adjustment.
Plane design are very similar if not the same, material used are less than par, except the wind join which use fiberglass. Overall weight is a big killer, if you are not an experience builder; think twice in getting this lower cost version. If you dont enjoy building, the extra works/time you spend would outlast the saving. And you might end up with a second grade model.
No flight test yet as Im not a winter bird.

Following are the differences beside color scheme. Blue v.s. white or red.
No instruction manual was given has to follows GPs instruction.
No spinner, no collet prop adaptor. $
Ailerons are not pre-hinged as original GP, the thick round fiber plastic are given. More works
Wing joiner is a 12mm diameter, 18CM long fiber tube instead on the short wood joiner. It should be better as it is much longer than the original. But my tube was meshed on one end.
Mounting holes form main landing gear are not pre-drilled, same as the two wheels pants, has to drill carefully with proper alignment.
The tail wheel gear is not up to par as the original GP, the part to secure to the tail (fuselage) is poor.
The single screw, oversize tail gear holder will not secure good to the fuselage without any modification.
Wing dowels is fiber glass not wood. Should work the same.
Fuselage fiberglass is the thinnest so it will take the speed of this plane.
As someone mentioned, this firewall is thick. Same as the GP it was not overly secured. From experience I added thick epoxy around the firewall to make it more secure to the fiberglass surrounding. So a minor nose down would not separate the firewall from the fuselage.
The four magnets that hold the battery hatch cover were installed beh

On hyperion 3025-08 and Nano-tech 6s 2200mah battery, this thing really screams! close to 200km/h. have beefed up elevatorstabs, other than that its stock config.
Flies straight and true, even better than quite alot of .40 size birds
Aerobatic is superb with different motor config.
batteryhatch doesnt fit very well.
best bang for buck ive ever bought!!

Hello guy's. Just to let You known that I did put a video of my flight with this Cosmic 920mm. As You will see.......all went smooth et very nice. a small video for my report..........Lollllllllll

Finally managed a sucessful flight after repairs and mods. With new firewall (ring) fully epoxied in and motor mounted on the std aluminium cross on the front of the firewall, and around 2 DEG down and 2 DEG right thrust and balancing (upside down) at 52mm from the leading edge it flew well. Flies around 60mph wot with the TGY 2836 1200kv o/r and 20c 2200mah zippy LiPo and tracks nicely at any speed. It does not like too much elevator in a loop and will fly right through too much input at speed.

Small inputs only are required to fly smoothly and rolls are smooth with no funny habits. This plane would be a candidate for a good set of flaps or perhaps airbrakes as it does not want to come down for a landing. It is going to take a few landings to find how slow I can get it as my first one was about 200 feet, and that was with 6 attempts to get it slow enough! This is NOT a park flier and I would not suggest it for novices as you could get into trouble quickly with this as it won't forgive a mistake anywhere near the ground! With a bigger motor and battery I think this would be starting to become a brick and not be as pleasant to fly unless you prefer missiles!. With the 2200mah 20c I got 10mins of mixed flying with 20pcnt left in the battery and with everything cool to barely warm. 1 star off for weak tailplane and slack glueing of firewall and front wing mount, 5 stars for flying

Hi guy's! I stated my first flight report in the discussions tap. You Can also see some photos at the files tap. Ciaoooooooo

Hi guy's! You Can Read m'y first report in the discussions files and see some photos in the files tap.