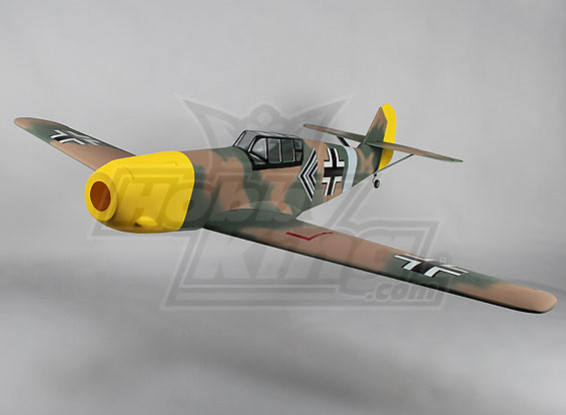 You will earn 93 bonus points for buying this item.

The ME-109 was the backbone of the Luftwaffe from the Spanish Civil War until the end of WW2 and was built in greater numbers than any other fighter before or since. By 1945 the ME-109 was a long way from it's 1939-1940 glory days, yet was still favoured by some German aces over the FW190, what is even more impressive that is that the likes Erich Hartmann used the "109" to achieve an amazing 300+ air to air victories.

The Hobbyking ME-109 is an impressive size and looks fabulous finished in a proper matt "North Africa" style painted covering. Designed for either a 0.60 two stroke or 0.90 four stroke engine, the included hardware kit is comprehensive and comes with an engine mount and fuel tank. The BF-109 has a reputation, both the full size aircraft and as a model, for poor ground handling, so the mechanical retracts have a wider spacing than scale to prevent ground looping, a good practical trade off.

This model is superbly priced for a 0.60 class ARF warbird and built with the reccomended RC parts and engine it turns into a bargain. For the electric flight die hards, this would be an old school electric flight conversion, meaning either wing off for changing batteries or make your own battery hatch, yes, some good old fashioned modelling!

I have just received my 109 from Hobby King. Paint scheme was not scale so I have had it repainted in the classic grey/dark grey with yellow wing tips. I also had the plane fuel proofed. Overall, the craftsmanship is fine. It is not a refined ARF and there was some minor damage and imperfection from freight and handling. Mine was on backorder for a while and I believe some of the construction was slightly rushed. However, do not get me wrong - for the price I am very happy with it. Instructions are awful and barely worth following.. I have no idea what the center of gravity is. Does anybody know the measurements? I will post more as my build progresses..

I purchsed one of these models and powered it with a 90 nitro two stroke. It has plenty of power and flies well but it is very dissapointing because although the plane is meant for glow or electric its best suited to electric because the painted film cannot withstand any fuel it just dissolves. The camouflage paint on my model dissolved leaving a messy sticky surface all over the plane. Its a mess and the only way to fix this is to recover or repaint the entire plane with a fuel proof coating petrol dissolves the paint also. This plane was definately made for electric with the covering supplied so beware if you intend on using a gas or glow engine!!!

I've received th BF / Me109. The 'Gear' location was a sacrifice for this model. In Simple explanation, It's like having a P-51 retract gear on a BF109. It should've been like the Spitfire type. BF109's fold outwards (gear up). No Scaled spinner, No Propeller included in this kit. There is a small CD /DVD included for the assembly of it but do not rely on it. it's not really helpful if you're kinda new to this hobby (like me). The packaging was ok. the appearance after unboxing was ok, there's a bit of wrinkles on the coating but not serious concern. No Flaps on this model either. So if you're a builder, you'll need to add that yourself.I'd like to add flaps & modify the retract gear location to make it more scaled but this needs a lot of work & materials to complete the project. Most of the required hardware like push rods, horns,...etc seems to be in order. Overall, for the price HK is charging for this model, It's pretty good. This is my first Warbird, So Please...for you guys who has some advice to give, please don't be shy.