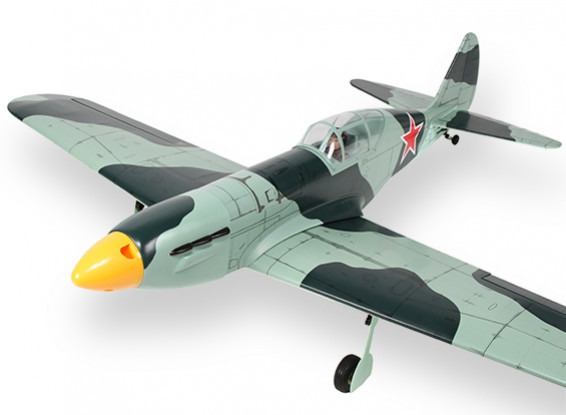 You will earn 111 bonus points for buying this item.

The Mikoyan-Gurevich MiG-3 was a Soviet fighter aircraft used during World War II. MiG-3s entered service in the spring of 1941 proving to be a handful for pilots accustomed to the lower-performance Polikarpov I-152 biplane and the Polikarpov I-16 monoplane.

The MiG-3's top speed of 398 mph at 7,200 metres was faster than the German Messerschmitt Bf 109F-2 in service at the beginning of 1941. At lower altitudes the MiG's speed advantage disappeared as its maximum speed at sea level was only 314 mph while the Bf 109F-2 was slightly faster. Unfortunately for the MiG-3 and its pilots, aerial combat over the Eastern Front generally took place at low and medium altitudes where it had no speed advantage.

Our MiG-3 model comes almost ready to fly with just final assembly and equipment installation required. The all balsa airframe is strong enough to take a nitro engine, yet is light enough for electric conversion. The forward fuselage has a magnetically secured hatch in it just for accessing things like your batteries or fuel tank. Rugged fixed tail dragger landing gear is great for rougher grass fields, though is designed such that a set of retracts will drop right in. This model comes with a very complete hardware pack including pushrods, control horns, fuel tank, engine mount, and even a plastic spinner.

To add to the scale realism, the covering is a multi color plastic film, semi matte finish with printed panel line and rivet details. Rounding out the model is a nice pre-painted fiberglass cowl.

Flying the Mig is a treat thanks to the light wing loading. This sport scale model isn't the heavy iron of years past. The thicker than scale airfoil tames the stall, meaning the Mig flies more like a sport model. Rolls are just off axial as you would expect from a warbird. Drop in a set of retracts to clean it up for some adrenaline pumping low and fast strafing runs, pulling up into a victory roll at the end of the field. The printed graphics make the model pop in the air and on the ground. A nice change from the Mustangs and Spitfires, this Mig 3 should be just what the doctor ordered.

This plane Apesta... At maiden flight, the elevator broke and the plane fell to the ground.
Model quality is quite poor and now I have an engine and several servos not work due to the poor quality of the product.
The wood is of poor quality, it was necessary to strengthen the site to place the servos.
The elevator is made of balsa wood without any reinforcement.
I followed step by step instructions in the manual, but it is not possible to predict the elevator broke in mid air.

Well designed even if not very scale. Nice smooth, easy, flier. Flown on 5020-640 motor with 14 X 7 on 4S 3800 pack. Esc switch mode 50 amp. Most flight uses little more than 25 amps during scale like flight. The model does not lose speed that much through the landing so set up your approach fairly low with just a touch of power. As a sport scale that looks a little different this is good value. I fitted HK retracts and they only required a little filing and grinding to fit well.

This plane goes together very easy and flies well, no bad habits it's easy to fly, check that the push rods come out at the correct opening, mine did not and had to change 2 over, no big deal, mine is electric, make sure to put in down thrust when installing the motor, run's on a 4.500 4s for 6 minutes of spirited flying with 20-25pcnt left in the battery, you can paint on the covering with no prep, spray can paint sticks well, pic uploaded

Ive just taken delivery of this fantastic model ,well built, the folie is nicely printed, no extra ironing needed, the wings have to be stuck together so youll need a a wing sack 1500mm to transport, its just another well built, well priced, good quality product from HK.
If you like warbirds and are fed up with styropur /EPO this is the one for you I highly recommend this product and for 94,00 you cant go wrong.
PB

Good Plane!!!
I applied ASP91 4C and 13x8 prop.
well maid and good flight line.
I suggest to you by first engine warbird.