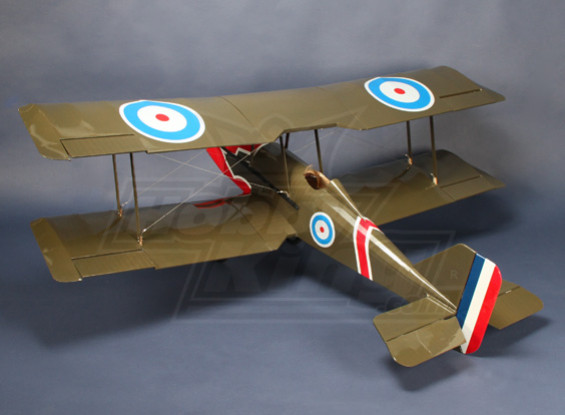 You will earn 90 bonus points for buying this item.

Considered by many to be the best British single seat fighter of its time, the SE.5a was designed and built at the Royal Aircraft Factory at Farnborough in the United Kingdom to combat the "Fokker scourge". The SE.5a was the successor to the SE.5 sporting a more powerful 220hp engine, and was flown by several top allied aces, including Albert Ball VC.

This balsa and ply wood built up SE.5a is covered with a quality covering film and finished with scale details including scale wheels and rigging wires. All hardware is included to get your model in the air including a 320cc Fuel tank, Glow engine mount, EP motor mount and all control rods, horns, clevises nuts, bolts and.

Very nice flying model, the covering is VERY thin and care is needed when building. Keep as much of the running gear as far forward as possible. I got away with a 4 cell 2450 with a small piece of lead and it balanced nicely. Shame the manufactures did not take the time to make it look more scale, I lowered the undercarriage and reduced the wing spacing and it looks a little better.

Anyone have tips too and pilot, and battery. Using this engine http://hobbyking.com/hobbyking/store/uh_viewItem.asp?idProduct=18122
ESC 70 amp, and have 14 x 10, and 12 x 8 wooden propellers.
Think I need 4 cells, but what size

I would like to give this kit a 4 stars overall rating due the quality of the materials and pre-construction of the plane. The plane kit came very well built where everything fit well together and straight. The coverings are nice and tight and no surface wrinkles that are worth pointing out. However, some hardware pieces are missing and will cause the build time to increase. For example, the wheel collar nuts are too small to fit over the wheel axle. The internal of the supplied collar nuts are 3/16 (.18mm) but should be 7/32 (.21mm). There are also other missing screws and nuts that are needed to attach the wing struts to the fuselage and the top and bottom wings together.

Also, the front center piece of the bottom wing has two holes that are 5/16 (.31mm) in diameter but there are no wood dowels to be used for them. If the wooden dowels are provided, they would go between the wing and the fuselage to keep the wings tight and in place while in flight.

Other than that, the kit is very good quality and the price is just awesome for a plane this size and pre-constructed.

This is a very good flyer.I think the asp 61 fsis the ideal engine. That plane fly very well and the landings are very smooth

very good value for the price with some minor corrections required to ensure good performance;
CG is not 70 mm from LE as indicated in the manual but 105 mm !
This means that with 4 stroke engines of 0.60 or larger tail ballast is required even when installing a 1300 mah Lipo aft in the cockpit. With a 0.46 2-stroke most probably no ballast in case the heavy steel control rods are replaced by carbon.
The wing covering had no overlap at the TE therefore provide overlap strips, same colour covering material is available.
My model flies well at 70-80pcnt throttle using an 30 year old OS 61 FS, more power is only extra weight.
Rolls are rather slow even with full ailerons.
Apply contact glue to the rubber tyres and the wheels otherwise they come loose during landing.
Provide some balsa wing skids at the bottom wing aft edges using contact glue

This has to be about the best value plane that can be bought. It looks great, is well made and the parts fit together very nicely. However it is not for first time builders. The instruction book is a shocker and I had hardware left over that I had no idea what it was in there for and other small parts like bolts missing. Some of the cables didnt fit etc but I have an extensive range of parts and tools so no problems. All in all a brilliant plane for the money. I fitted a 4stroke 52ASP and it balanced out fine so will be interesting to see if the power is sufficient.

Very nice ARF, some knowledge of ARF building is required. kit is very nice... spent most of my build time scaling.

This is one dam good plane for the price $99.99 very well made. the only mod I made was to the tail, I used a bit of wire for a tail skid and strengthen the whole thing. Power comes from a 4248 motor 1200watts, 70Amp HK speedcontroller, 16" prop and 6cells battery.
My setup the plane takes off less than half throttle. I have found this one very easy to fly and looks fantasic and big in the air well worth getting you will not be disappointed.