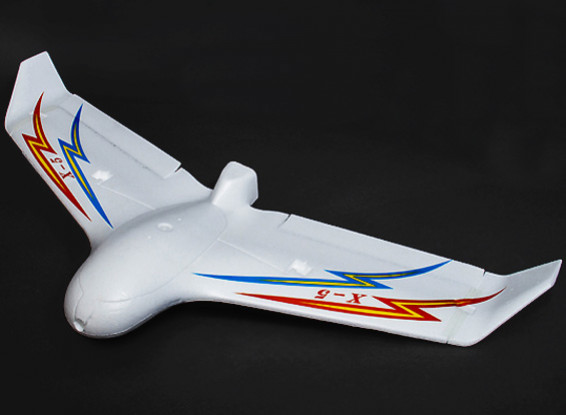 You will earn 61 bonus points for buying this item.

This is the X-5 flying wing from Skywalker Technology. The X-5 has been specifically designed for FPV and UAV, customised for F-Tek stabiliser systems.

An awkward looking but fantastic flying FPV / UAV platform, moulded out of EPO so it's nearly indestructible!

This model offers a large amount of under canopy space, excellent glider performance, fast low power cruise speeds in the region of 60-70 kph.

The airframe was designed from the outset to take FPV and other video devices, the equipment bays have been laid out to suit FPV / UAV applications, there is a camera mount in the nose and the canopy is a bolt down affair. Transporting the airframe is easy, it's compact enough to be put in any car's trunk!

Don't be fooled by its size, the payload capability is beyond your imagination. There are reports of hefty payloads in excess of 2200 grams being carried without issue!

NO instructions but as an experienced builder no problem. A novice could be frustrated.. In order to stiffen & protect I started with\ bottom , sprayed with spray glue. Allowed to dry for at least 1/2 hr. Then covered with 2" wide fiberglass tape. Covered everything including evalons & hinges. Did the top the same way, I'm flying at high altitude ( 7630', 2326M ) . Using a 1200kv motor 8/6 prop 3000ma 20 C 3 cell Turnigy lipo. Launches straight out & up. This wing is a floater with motor off, super stable. Typical flight times 20+ min. between motor & floating.

First, to build it is not for beginners, due to lack of notice.

Delivered in a big strong box and perfectly protected, with the model and a few stuff (horns, servo wires, velcro, wood pieces........AND NO GLUE AND NO MANUAL or notice at all) .

You will need : a cutter with sharp large blade, EPP glue, to glue wood to epp, and EPP to EPP glue, and something to enlarge the place where you'll scratch your batterie (Dremmel, iron solder etc...), otherwise , if you do not pull back a simple 3S 3300 battery pack you wont get the correct C.O.Gravity.

Use velcro peel'n scratch too to glue your ESC , which is outside at the under-back side next to motor.

HXT900 servos fit perfectly, glue them with a very very small quantity of glue.
you will need the screws to fix motor in the wood part (i use the 4 screws from my 2 HXT900 servos because the ones given are too big to me).

BEFORE cutting the 2 elevons at right and left, glue in place the servo a its neutral position, an connect it to the elevon to get a correct neutral position for elevons.

Two (ovoide shape) wood parts are to be glued to winglets, so winglets do not hit the groud, the wood will, and they are also used as winglets.
I changed the control horns to have screwed ones, not glued to the elevons (try to glue plastic to EPP... !).
to paint it, use spray for EPP, otherwise not good, paint goes away.

A nice airframe but very unhappy that my X-5 did not come with the appropriate mounting hardware for the winglets and battery hatch. I will be cutting them myself from plywood on a scroll saw. Instead, I received two strange airfoil-shaped plates about 7" long, completely useless. Also, no instructions besides the useless document found here, under "files". First purchase of a plane from Hobbyking and most likely my last...

One Minus Point for the hatch! It needs to be screwed in every Batterypack. I will try to use Some magnets instead!

Well thought out and sturdy airframe. Be forewarned there are no directions whatsoever, most of it is pretty self explanatory though.