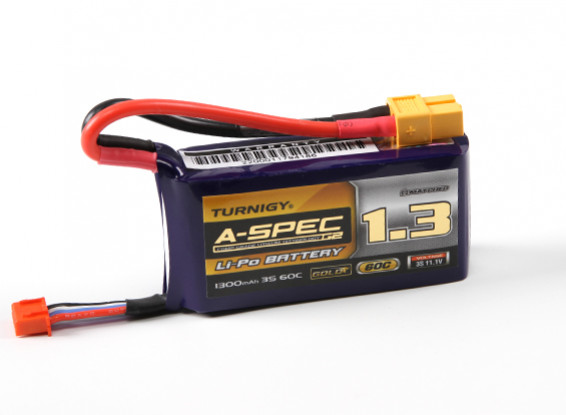 The A-SPEC G2 packs have the most stable consistent formula yet giving you peak performance without sacrificing reliability. Featuring gold plated balance leads, silver plated discharge wires and a CNT (carbon nano tube) additives mixed into the electrodes, these batteries are simply unmatched by any other in performance and build quality! The new CNT/electrode mixture reduces impedance, generating less heat and maintaining a higher voltage under discharge load. Basically this means A-SPEC batteries will provide constant high power your powertrain especially during high current draw manoeuvres, and they will provide a longer cycle life due to the lower operating temperatures of the pack.

For those that love graphs, it means a straighter, longer curve. For pilots it spells stronger throttle punches and unreal straight-up performance. Unfortunately with other big brands; numbers, ratings and graphs can be fudged. Rest assured, TURNIGY nano-techs are the real deal, delivering unparalleled performance!

Very happy with this battery so far although I've only done about 5 cycles. I haven't really had enough time with it to tell how it compares to the older nano-tech (which I wouldn't recommend).
Power delivery is very good, flight times on a 300 quad is around the 5 minutes which is not really long enough. I guess in retrospect I didn't need this quality battery for that quad. All up, no qualms after buying this battery

Got them on sale. Very good so far. Great punch, charged them about 10 times and all is more than fine.Good build quality. Compared to regular Nano-techs, they are better, but personally would not pay full price for these.Very satisfied :).

very nice battery has improved the performance of my optim 300cp came very nicely packed i would recomend this battery to anyone with a heli that takes this size battery i am trying the graphene 1300mah 11.1 vlt 3s just ordered it see how it perform's

i may have received a bad one but my zippy 40c have more power and longer flying time than this Aspec, for the price i wouldn't recommend it.

compared to the normal nano-tech 1300mAh 45-90c this A-tech losses the battle, the fly time was 2 minutes shorter and when the IR was measured it is double what the nano had

less power and two times higher inner resistance than my 40 cycles old Nanotech 1300 45C LiPo. Should it not be the other way round?

for the price you cant beat these

They have a red balance plug so they must be good. But I didnt see any performance difference from my older 45c 1.3Ah batteries. Maybe its just marketing. One of the 4 that I bought, had one cell sitting at 0.34v on arrival. "Matched"