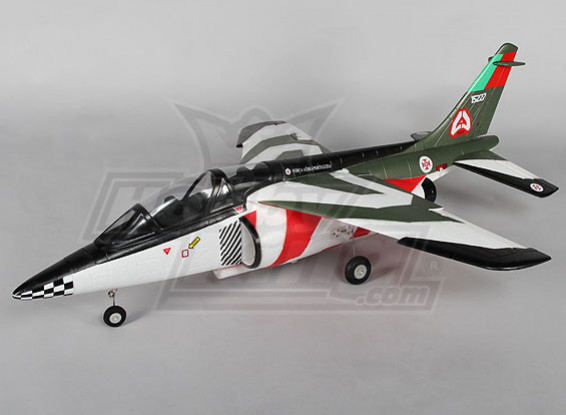 You will earn 66 bonus points for buying this item.

The Alpha Jet was developed jointly by Germany & France in the 1960's primarily for use as a trainer, although armed versions were also built. The Alpha went on to be used by several Airforces, particularly in Europe, this version is in the colours of the Asas De Portugal display team.

This 64mm Alpha Jet is made from tough EPO and requires minimal assembly as the 64mm fan & ESC/UBEC are all pre-fitted as are all servo's. The colour scheme is distinctive and attractive and it will help with orientation and as this model runs a 4s set up, that is just as well, it's quick! Full 4 channel control is great for air-display style routines and with a servo per elevator, this little Alpha is crisp. A nice feature is the servo operated bomb drop which add's to the fun.

Fun, tough, attractive, good size for transportation, easy to assemble, good flyer and fast, there isn't much more you could ask of this fantastic little jet!

Great little EDF. Flew great out of the box at the recommended COG. Roll rate is stupendous so be careful when setting up ailerons. This little bird is FAST and not for the feint hearted! The bomb drop is pretty useless and this model would be better supplied with retracts fitted IMHO. For the price it's a great buy but not for beginners!

This is my first EDF ducted fan jet, the power is fantastic, you can take off from fairly long grass as the wheels are bigger than shown, I had an accident within the first 3 seconds but.. its back together. it is very robust and this surprised me. Note that the controls are super sensitive due to the small wings so it reacts very quickly with small movements, hopefully my second flight goes a lot better. Oh and the battery strap provided is none adjustable and getting the battery fitted is very tricky.

Ok, I have had several EDF Jets of varying sizes, mostly EPO, some EPS and one composite. I bought this jet in a moment of 'Flash Sale' madness, built it, flew it, broke it and was so impressed I ordered another for the Aus warehouse!

I thought initially that the jet would be too heavy to get off our short grass strip without a long run. Wrong! It accelerated and took off easily. It is fast and aerobatic enough, but maybe the performance would improve significantly without the fixed undercarriage.

Unfortunately my first flight was abruptly terminated when it lost a wing when pulling high 'g' - this was due to not being sufficiently liberal with the 30 minute epoxy and the glue not taking to the foam properly.

However- as it came down, the rest of the model literally disintegrated. There is not enough glue to hold the parts together - be warned - examine and re-glue as necessary before flying.

This jet is okay. The electronics are cheap and I actually changed the EDF to a an EPF unit which makes it fly better on a 2600 4S but overall I would not purchase another one. Cheap quality.

Easy to build, needs cf tube/bar to strenghten main wings, I used 5m CF tube. Only problem is that I got 30amp version that tells me to use 3S 1300 battery. And manual informs that 30 amp flying weight is 580grams.. Well plane it self weights 680 grams and with 3s 1300 battery it weights about 790 and then it is nose heavy so with weights total of 45grams to balance CG plane weights 835grams.. I am am afraid to fly this because of weak battery and weight difference between manual and my plane..

It's my 10th EDF and I have 40 flights so far with the 64mm EDF Alpha Jet. My commnets are the following.
1. 4S 2200mah is the way to go, flight time with sensible throttle use is up to 4,5 min. I tried 4S 3000mah and it flew like a brick...
2. To achive CoG I cut the foam in front of the battery tray and placed the 2200 4S about an inch ahead of the original battery tray
3. I installed a carbon fiber rod to join the main wings and another on the stabilizer. Rock solid...
4. The landing gear lasted only a fea heavy landings. I replaced the mains legs with some old Parkzone metal wires which I bended the same way as the original ones and they are rock solid now.
5. The first flight was in a windy day and I almost lost it... Others in the club watching wished good luck...Motor is very weak and AILeron was very touchy. In the next flights I reduced AILeron D/R on my JR9503 to 60pcnt, left ELEvator at 100pcnt and increased EXPO at 37pcnt to both AIL and ELE. Rudder D/R only for take off down to 80pcnt and EXPO 35pcnt. Beautifull 70-80m take off rolls. For smoother turns I applied AIL to RUD mix 40pcnt for both L and R turns. Now it flies like a train and is very stable on landing!
6. No loops with the 64mm setup. It's very weak. Don't change it, maybe try directly the 70mm version. Also HK remove the video, because it is for the 70mm version...
7. I wouldn't recommender it to a beginner unless he fi

Hi, just updating review after I have flown the alpha jet;

Have had about 6 flights total. This is the first EDF model I have flown and it is surprisingly easy to fly and can maintain flight at surprisingly slow speed. She's very steady in the air; performs rolls and high speed fly-bys with ease. However, I found performing loops can be a challenge without stalling! First flight ended in near disaster when the battery ran low and had to make a hard landing. Now I set my stop watch on the tx and land at 4min! I have put a rubber band around the rear landing gear to prevent them bending apart on landing. Other than that she's fine left standard.

All in all.... great model, excellent flyer! Would recommend.