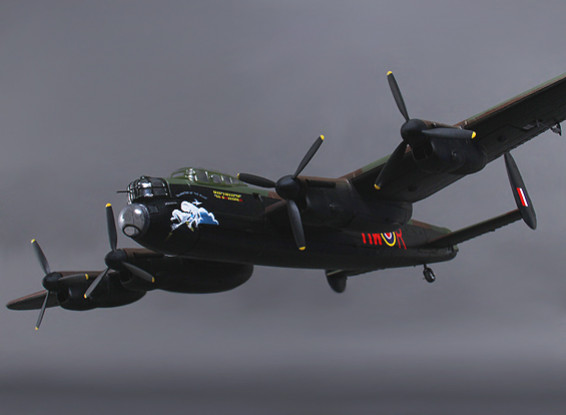 You will earn 147 bonus points for buying this item.

The Avro Lancaster was one of the finest bombers of WW2, born out of the failure of the Avro Manchester, the Lancaster became the mainstay of RAF Bomber Command, with it's superb handling, good looks and ability to absorb heavy punishment, the Lancaster was loved by it's crews. On the 16th May 1943, the Lancaster's of 617 Squadron took off from England to execute Operation Chastise and attack the Great Dams of the Rhur Valley, within days of the raid, the Lancaster and crews of 617 Squadron became household names, this was the first of many Special Raids made by the Lancaster. It was the only Allied aircraft capable of carrying special bombs like Upkeep, Tall Boy and Grandslam, ironically the Lancaster is associated with area bombing but became a legend because of these daring pinpoint accuracy raids, including the sinking of the battleship Tirpitz.

This superb Lancaster is a high detail scale model and wears the colour scheme of "Phantom of the Rhur" which is the scheme currently used on the BBMF Lancaster, one of only two examples left flying in the world. Made from tough EPO foam, this amazing plug and fly model is a nice size and is perfect for transportation, especially as it has plug in wings, yet it's large enough to have presence. All servos, motors and ESC's are pre-installed, making assembly straightforward. There is tons of scale detail to admire, the panel lines, glazing, .303 machine guns, scale 3 blade props (which are counter rotating for smooth flight and take off), spinners, the molded cowls, the list goes on, this does make the Lancaster more involved in terms of build, but all the more satisfying!

The Lancaster also has plenty of working features, the scale undercarriage is retracting and is linked to a sequencer to operate the gear doors, even the tailwheel is scale. The bomb bay doors are servo operated and the Lanc even comes with some bombs to drop, including a massive Grandslam bomb! With all these features and servo's, the model needs a reliable RX power source and comes supplied with a 1600mAh 4.8v RX pack. With it's practicality, stunning scale detail, superb flying characteristics and amazing features, this Lancaster is a must for any scale and warbird enthusiast!

Tried to fly the plane after extensive repair - see my earlier review but still flies as a stone and crashed again. So I have now thrown it into the dumpster after removing all useable items. I recommend you save your money or buy another flyable plane.

My Lanc came today and was very nicely packed
And no damage. Very happy.

This is a tough one to rate because it is such an appealing plane. Its actually a bizzare mix of sophistication and cheapness!. All the bells and whistles are cleverly executed with inferior parts. The servos are so tiny and weak they are barely up to the task. I upgraded to a bigger Turnigy servo on the elevators. Like most everyone else on this forum my gear doors stall in the opened or closed position. At some point once I see how it flies and if its worth it I may address this but for now it simply means they might fail at any time and too much current is being pulled from the battery pack. I am certain this is not a plane you want to land wheels up! That said all the motors are in perfect synch and the bomb bay sorta kinda closes so it should fly at least once. The appeal is the subject not the execution. Hey HK I would gladly pony up another $200 for a 6 foot version with real components. C'mon guys plug it in the CAD machine and lets see a big boy Lanc!

Not flown mine yet but a few serious build issues ! Bent bomb doors, hinges coming out and the gear door servos stalled in open and closed positions. It was impossible to fix this so I re-engineered the system and used the gear legs to work the doors. Tailwheel mounting broke up on assembly.

Looks beautiful and with some cockpit detailing I can forgive it almost everything.

Why no rudders however - could be fun in a crosswind takeoff !

Finally got my V2 in early August. 4 days form HK to the States! All the packing issues from V1 have been addressed, mine was pristine. The esc issues also, mine work perfectly. Lots of detail, the paint job is superb, far better than most foamies. Still some niggling QC issues - broken gear door hinge, gear door servos buzzing and working intermittently. Tailwheel broke off first time out. I am still playing around with putting a crew in, so I fly it without glazing. Grass take offs need high elevator rates to keep from nosing over. Flight is pleasant and predicable, except the camo works far too well if you get below the tree line. I make long approaches, carrying power all the way til the mains touch and it just about lands itself. The servo and tailwheel issues and the lack of regular spares like props and landing gear are the only gripes I have. And it's a LANCASTER!!!! I have the only one in town.

Waited months for V2 to arrive. Once they were in it was 4 days from HK to the US. All the packing issues of V1 have been addressed, mine arrived without a mark on it. ESC issues as well, all 4 motors worked perfectly the first time. Couple of niggling QC issues with the tailwheel, gear door servos and the bomb doors, everything else perfect. I use a BEC instead of the flight pack, so my lipo has to come much farther forward, but it still balances without added weight. Has a little trouble on t/o with grass, needs high rates on elevator. Landings are a breeze as long as you carry power til the wheels touch. No nose overs on grass. Starting to work now on detailing and such, but the plane is a gem. It looks magnificent in the air. Good bang for the buck.

Recieved V2 well boxed with no transport damage. Un flyable out of the box with severe washin in both wings. Cold bent the wing tips to have an even few degres of washout by eye. fixed lousy controle horns by screwing a self tapping screw through the top of the control sufaces into the horn. After staightening the bannana fins and tailplane and addressing the jittering sevo"s as best i could, off to fly. With the c of g nose heavy at 55mm from leading edge, takeoff was smooth, with steady climb, wings level. Stall with full back stick finally produced a wing drop, easily recoverd. Slow flight showed some loss of aileron authority. Beautifull to land, with good elevator authority to a smooth three point landing. And the Lancaster is redeemed. Although the wing can be fixed, it's unfair to allow this fault through to the public. Cheep is good untill it doesent work, then it becomes expensive.

Nice looking plane with lot's of details. Comes with a large bomb which you can see on one of the pictures but it does not fit anywhere, not in the bombay or anywhere else. And there are two more items, look like a ship steering wheel which I think are 4 bombs to be cut away. The bomb bay holds the battery and there is no fasting for it so be sure to use welcro or otherwise the battery will drop out when you open the bomb bay doors. The motors are not synchronised so at the first attempt of a take off, the plane dansed around on the runway. So be sure to set all speed controls by giving full trollte when connecting battery and then lower down to no throttle when you hear the beeps. After this all motors ran at same speed and take off was easy but climbed very slowly. The plane needs a lot of speed to fly well - it behaves like a stone and need at least half trottle at landing. I tried to land at almost no throttle but id dropped to the asphalt like a stone and broke both landing gears and one prop. You will need a long smooth runway since landing has to be at high speed. Maybe short cut grass would be better. Anyhow it is not a well flying plane - much too heavy so I give only 2 crowns for the good looks and if you buy it, I suggest you hang it in the ceiling as a decoration but a bit pricy for this. Manual is very poor and of course so far there is no spare parts so buy a set

I would love to write a review on the Lancaster - but I can't, because after having ordered the things months ago it has not yet arrived. I contacted Hobbyking yesterday to ask why it was taking so long to turn up - I was told it had been delivered to another country !! Then, I was told they will need another month to investigate if it has been delivered to me, even though I was told by the same folk doing the investigating that it had been delivered to ANOTHER COUNTRY ! Now I am being told the Post Office has it ! With 20 past orders to Hobbyking, totalling nearly $3000 Australian dollars, I would expected another one would just be sent!, not penalised further because Hobbyking's own mail contractor has failed to deliver. Not Happy.

After making over 230 orders with hobbyking, this has go to be the worst kit i have ever bought.

It may look good in the pictures, but parts break off very easily, the wing alignment was a quarter of an inch out and unusable - support say i need to wait for replacement ( still waiting for replacements to arrive after 12 weeks !!!) the ESC's/motors combo must be rubbish as they hunt back and forth on or near full throttle, which would make it impossible to fly, so they also will need replacing - cant ever see me flying this one, and a total waste of money - don't waste your money on it buy something else !