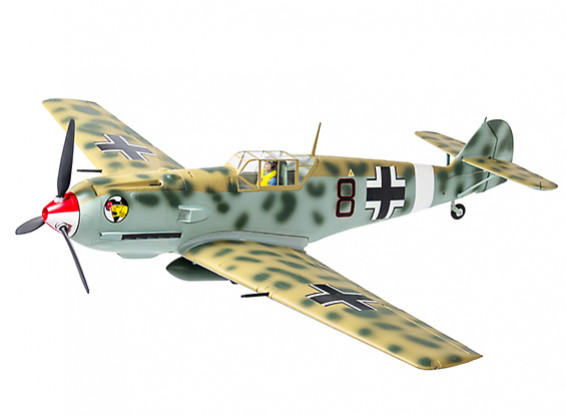 You will earn 137 bonus points for buying this item.

The Messerschmitt Bf-109e was the backbone of the Luftwaffe fighter force during World War 2 and one of the most iconic aircraft of the period. It was one of the most advanced fighters of its day and a powerful piece of hardware for the German military war machine. Durafly has accurately reproduced the plane in two stunning schemes. One based on the 1940 Battle of Britain with the menacing "Yellow nose" and the other a 1941 tropical camouflage used in the desert campaign.

Originally designed by Willy Messerschmitt in the mid-1930s the Germans constructed over 33,000 Bf-109’s between 1939 – 1945 and they were flown in many theatres of operation. The Bf-109e was a fierce adversary for allied fighters such as the Hawker Hurricane and the legendary Supermarine Spitfire. With its lightweight design, retractable landing gear, destructive 20mm cannons, powerful Daimler-Benz liquid-cooled fuel-injected inverted V12 the Bf-109e would have made the Luftwaffe pilot feel nearly invincible.

Durafly’s 1100mm Messerschmitt Bf-109e is a fantastic scale rendition of the famous Luftwaffe fighter. The Durafly team has worked extremely hard to bring you the Bf-109e which is undoubtedly the best looking RC Bf-109e ever made. The Durafly Bf-109e has a modest 1100mm wingspan, scale electronic retracting landing gear, scale flaps, and a powerful brushless outrunner motor spinning a three-bladed scale propeller. Power is provided by an AeroStar 3736-770KV motor, AeroStar 50A ESC and when combined with a 2200mAh 4S Lipo battery this gives an outstanding performance to this agile WW2 fighter. There is even a fully functional bomb drop system complete with a scale bomb.

wow... good looking but thats where is finished. motor was partly seized, removed striped and cleaned the extra glue from it, then one UC mounting block was loose removed and re glued that, setting up the flaps and had so much freeplay in the horn it was going to flutter, break glue to get the servo arm out. the one of the servo arms were in the wrong position no vertical for the ailerons. remove that one. threads striped in the servo shaft. fit a bigger screw, Ok shes ready.
1st flight 2.2A 4 cell did a full ground run and could smell a electrical burn ok prob the motor windings getting a bit warm from full power. back off its ok. started the roll out only to see smoke from the motor then it locked up with more fancy smoke.....
whats happend the the quality control? is that why they were on special. what a waste of money.

First 2 flights were uneventful after reading about torque roll/yaw on takeoff. Feeding the power in slowly, a bit of throttle to rudder mix, and it gets airborne without much drama. Only a little trimming required and very little effect from flaps. Only flying 3S ATM which is nice & scale, but would be better on 4. Post-flight, gear legs needed grubscrews re-tightened & Locitited in. Put better non-slip material in the battery tray. Overall really pleased - super scale looking and flys very nicely

Yet to fly, but certainly a great looking model. All servos/retracts working well. Couple of disappointments are the misaligned tailwheel (easily fixed) and the poor sand filter extension moulding, otherwise the fit and finish is very nice. Nice big battery/receiver compartment and easy to balance with the recommended battery. Some errors in the downloaded instructions - decals are all one type as are the wing bolts

Easy build and looks great very well made not had time to fly yet due to lockdown.

One of my favorite planes. Details are outstanding and the features and assembly are top notch

Excellent attention to scale detail with good in air performance.

my only complaint with this model is the servo units , the servos used are in my opinion of poor quality , the elevator servo in the model I purchased burnt itself out while I was setting the travels , fortunately on the work bench and not in flight . I have replaced both the elevator and rudder servos with better quality metal gear units . I would rather pay a little extra to have good quality electronic components , especially for the control surfaces , if the elevator servo had failed during flight it would have been game over . The retractable undercarriage not only looks good but works very well , and the bomb drop mechanism also works very well and adds to the overall scale look of the model , as do the 3 position flaps , over all I'm very happy with it , apart from the poor quality servos , hopefully DuraFly will use better quality units in future ? just a suggestion