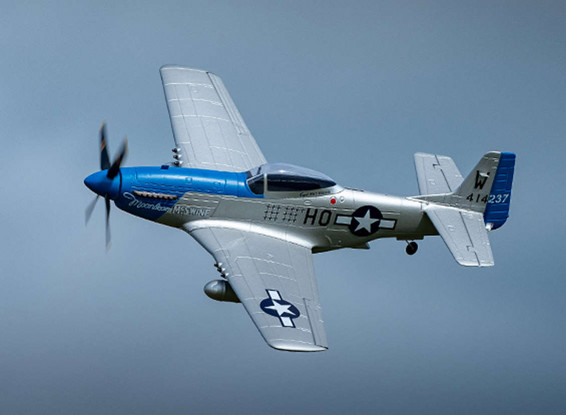 Product Description
This H-King version of the classic P-51D warbird is manufactured in a superbly finished EPO foam in an authentic blue and silver color scheme with all the decals pre-applied. This is the updated V2 version of this popular model and it now comes with a built-in 6 axis ORX flight stabilization system to make it even easier to fly. The stabilization system utilizes a 32bit MCU and a 6-axis digital gyro for ultra-fast control response, it can also be switched from beginner mode to expert mode.
The H-King P-51D Mustang "Moonbeam McSwine" is based on a Mustang built in 1944 and flown by Captain William T. Whisner. Whisner joined the 487th Fighter Squadron which was part of the 352nd Fighter group based in Bodney, England. This group became affectionately known as the "Blue Nosed Bastards of Bodney". Capt. Whisner was credited with 15.5 aerial victories during World War II which made him a triple ace, an outstanding achievement. The Mustang was one of the iconic US fighters from this era: it was cheap to build, had long-range, fast, maneuverable, and would take a lot of punishment.
There is little to build with the H-King P51D. It comes 97% pre-built with the motor, ESC and servos pre-installed. All you need to do is fit the main wing, tail assembly, and plug in the main landing gear. You will also need your own transmitter, receiver and flight battery.
It has the power to do all the maneuvers required for a World War II fighter and looks fantastic in the air. The stabilization system makes it very smooth and easy to fly. Its size makes it perfect for local parks, large indoor areas, or the local flying patch.
Features:
• Authentic scale detail
• Outstanding flight characteristics
• Fitted with ORX flight stabilizer with 2 different flight modes (Beginner and Expert)
• Efficient 4 blade propeller
• High torque brushless motor
• Complete high-quality hardware package
Specs:
Wing Span: 750mm (30”)
Length: 648mm (25.5”)
Weight: 425g
Power to Weight Ratio: 1:1
Motor: 2408-1200KV brushless
ESC: 20A brushless
Gyro: Intelligent 6-axis with 2 flight modes (beginner-expert)
Servo: 9g x 4
Propeller: 8x6 4 blade
Required:
5ch or more radio and receiver system
11.1V (3S) 800mAh or 7.4V (2S) 1000mAh 15C LiPo Battery (JST Connector)
Suitable Li-Po charger
Note: The user manual can be found under the “Files” tab above.
Product Specifications
Videos
Upload video

So for the price... this is really nice. The only downside is parts availability (I will probably buy a second one for spare parts as its cheap enough).
Just did 2 flights today. low altitude it felt great, for a small 750mm plane, with the stabilization, I have the same confidence in it as I do with a 1200mm plane (nice and stable).
To give you an idea how good the plane is, I havent flown in about 10 years - took this out and had no issues what so ever. The only near crash was the first take off due to these stabilisation systems not being around when I used to fly, so I didnt know in flight mode 1 that it wouldnt let me roll :S but chucked in into flight mode 2 and had a blast.

Flies very well but no spares

No spare propeller blades, spinner, wings & motors. Thus any mishaps makes the purchase useless. Also the grub screws holding the motor in place is stuck in and just rounds when trying to un do it. This means that the spinner cone can not be removed with out cutting the nose off.

This plane looks fantastic, is very quick and easy to assemble and flies very well indeed, once the cg has been sorted by putting 10 g weight in the tail. Very satisfied with the model and have since bought the Hurricane 750 mm model, which was very tail heavy and needed 40g on the nose.. Flies nicely now.

easy to build and in the gyroflying perfect to controll.

Goalies have come a long way. Beautiful and flies great

The Mustang arrived well packed and undamaged. During initial assembly I noticed one of the screws for the empennage was too short.
The first flight went well, a great flyer!
The second flight was again hand launched but the plane did not respond to any transmitter inputs and hit the ground damaging the propeller, motor shaft and the motor had come loose..
To access the motor and spinner there is a small 'grub' screw located under the battery hatch.
This screw had been glued in and would not move. I tried dripping acetone onto the screw and even cut the access hole larger and tried using a red hot Allen key in an attempt to loosen the screw.
Finally I had to cut the nose off, just ahead of the ply motor mount.
] found the ply mount was glued to the fuselage by only a small spot of glue.
Now for replacement parts, no stock of propeller blades and no mention of motor or shaft for the Mustang. The Hawker Tempest shares the propeller blades and motor, both were available on the Tempest site! I note now HK have referenced the propeller blades as interchangeable but not the motor, and no motor shaft.
HK could improve the reviews and satisfaction by:-
1) Improve the initial assembly
2) Maintaining supply of spares
3) Cross reference interchangeable parts
4) Supplying replacement motor shafts

Just had to have it

2nd one I bought. Flies very nice, when I took safe off I wasn’t ready hence I needed the second one. My only disappointment is that you can never get a spare prop with this model. I will buy at least 2 others from the set as they look terrific and very scale.

really nice Modell, fast to build and it fly´s in the Expert- Mode totaly surprised, easy!

Great small P-51. Nice scale derails and flys great in the air with no bad habits. I would recommend only flying on 3s. Gyro smooths out flights too.