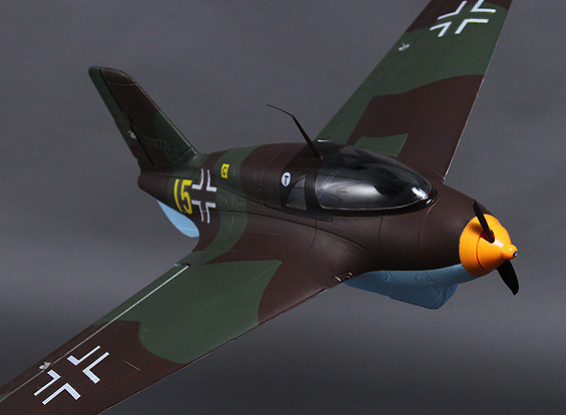 You will earn 93 bonus points for buying this item.

The Me 163 was the worlds first and only rocket powered fighter, it offered performance that was completely unheard of in the 1940's, achieving a maximum recorded speed of 698mph during testing. The Komet also had an unheard of rate of climb, it was designed as a rapid response interceptor and was able to climb to 39,000ft in 3 minutes but only had fuel for a few passes with it's 30mm Cannons before the Me 163 became a glider making it vulnerable to attack from Allied Fighters. This truly amazing and ground breaking Aircraft could be very dangerous to fly, although most accidents were related to the volatile rocket fuel and take off/landing accidents. Although it can be considered a failure in operational terms, the Me 163 was a truly amazing aircraft, little wonder it has so many fans!

This superbly detailed Komet is made from super tough EPO foam and requires little assembly, the servo's, powerful brushless inrunner motor and ESC are all pre-installed, leaving you to simply glue on the wings and vertical stabilizer, charge you battery and fly!  The scale detail is simply brilliant, with it's specially designed spinner, panel lines and extensive scale decals, it really looks the part. The paint scheme is also excellent for orientation and given the very high performance of the Komet, it needs to be! Other features include CF re-nforced wings/ailerons and a plastic landing skid.

Like the full size aircraft, this Me 163 offers truly mind bending performance, the powerful Brushless motor has 1kw of power on offer, unheard of in a plug and fly prop driven foam model, especially a scale foam model! With it's ultra-high level of scale detail, wide flight envelope and extreme performance, the Me 163 is a must for scale fans AND speed freaks!

Hi all
There are number of things you need to do before flying this lovely little beast!!!
You must fit a carbon rod through the wings or they will snap off mid fight
Hinge all surfaces
In large air intake to stop speedy over heating and stopping
Make sure there is 8 to 9 mm of reflex at all times or it will fly into the ground every time
Place a couple more magnets in the front of canopy to stop it coming off mid flight
Make sure cg is at 8 to 9 cm from LE there are to little bump in the foam on the under side

It's astounding how fast this thing really is and how well it rolls and tracks. They say you get what you pay for but in this case I think you may come out on top at least by a little bit. There are problems and lots of them. As usual the manual is buried in the files section and of course there are 2 CG's. The one in the manual is so far off its not funny. Once again as usual per HK you need to read the forums for every single plane you buy and learn from others mistakes and disasters. I will never understand this mentality on HK's part but no one forces any of us to buy from them. There is barely enough space for the recommended battery and the CG is of course super sensitive so mark it well and fasten that battery well. Tighten the spinner and prop nuts or they will come loose for sure. Add 8 mm of reflex up and then cut it down when flying and re dial it in when landing. There is a learning curve with this one that probably will exceed the life span of the plane. I bought 2 right off for this reason and the again typical out of stock situations so common at HK. As long as you ignore the directions on CG and read the forums and do all of the above you should have a decent chance of your surviving enough to have fun and justify the expenditure. One caveat: don't fly this around turbines, they hate when you blow by them with a $100 foamie!

I love this model, its cheap and it performs great, follow the manual and you wont have problems! Be sure to tape all the hinged control surfaces, with fibre tape, this will prevent any tearing at the insane speed this model achieves! Flys on rails and a real crowd pleaser. Thanks Hobbyking you guys deliver!

Setup was the same as larger variant, you need reflex in the elevons or it will screw itself into the ground. CG is critical, 80mm from leading edge at the fuse.

The downside, non sufficient cooling. Easily rectified with a dremel and a drill press for the spinner.
The stock in-runner is garbage so that's why the low marks on quality,value and overall rating. Cant even get a replacement stock in-runner!
Mine died on 2nd flight. Hobby King credited me 20.00 towards a new Komet, however, there's nothing wrong with my existing Komet except the crap in-runner and no available stock replacement.
I've dropped in an old in-runner from a Parkzone F-27c until the arrival of the Great Planes GPMG 5220 inrunner.

I got mine, and the first thing I did was remove the VERY heavy powertrain. I replaced it with an 1800kvh 28mm outrunner, and 20 amp ESC, and with 8-6 APC prop, this thing is a fantastic flier on 3s. I utilize as small as a 500mAh battery, up to an 1800mAh battery, and it handles them all with ease. I will echo the others in saying that all hinge surfaces should be re-hinged, as the foam hinges just will not hold up. I used some pinned hinges, and just CA'd them in. No problems. This plane is tough, too. I lost orientation, and full throttled it into the cement ground, and side of a building, and had it flying by next day easily. Only problem I can see, is lack of parts, and no kit! I would buy three kits if they were offered, and perhaps 10 canopies. As is, I will keep flying it as is, and purchase another for sure. Only downgrade on rating was the damage in shipping to the tail, as the rudder was separated on arrival.

This plain flies incredibly well and fast, engine blie very warm has designed 4 new vent holes at the engine so that now all is well not sow hot eny moor here you have much fun :)

Stock set up flys awesome! Be sure to set some reflex and get your CG right. Even on fast 4s 2200mah set up it comes in nice for landing see my video of its 2nd flight stock setup on 4s 2200mah nano tech.
http://www.youtube.com/watch?v=2it9mOVkbh8&feature=plcp

When I got the plane in the box the rudder was completely torn off but I used hinges and stuck it back on with some 5 minute epoxy. I didn't think much of it because things happen in shipping that cannot be controlled by the manufacturer. I only wished I had done the same for the ailerons. On my fifth flight I came by screaming past for a low pass and my left aileron ripped along the seam and my plane spun out of control into the ground. I would strongly recommend that when you buy this plane that you cut out all of the control surfaces and glue them back on with hinges.

The good news is that this plane is awesome!!!! It is sooooo fast on 4S. At full throttle it easily flies at about 100mph. It is not for the slight of heart. If you are new to flying wings you may make the mistake of setting ailerons level with the wing like a normal plane. DO NOT DO THAT!!!!! It will dive into the ground when you launch it. The plane has to be set up and flown with the two ailerons deflected upwards about 7mm - 9mm from the edge of the wing. When you pull back on the stick (to make it climb) it deflects further upward. To make it dive the ailerons will deflect downwards. That in my opinion is the reason why the ailerons came off in flight ie large deflection, lots of movement and large wind forces action on the edge of the controls.

I am away on business right now but when I