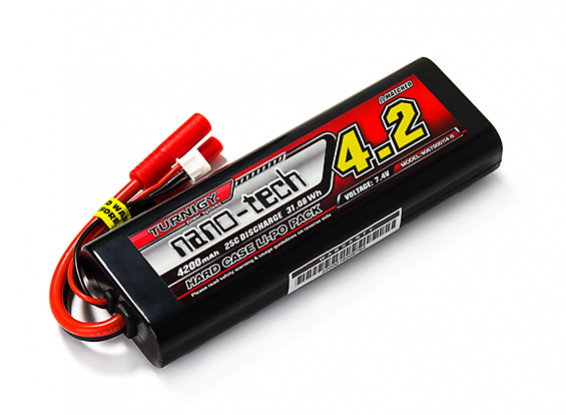 You will earn 18 bonus points for buying this item.

For those who love graphs, it means higher voltage under load, straighter discharge curves and excellent performance. For drivers it spells stronger throttle punches and unreal down the back straight performance. Excellent news for serious drivers!

Used this battery as an upgraded replacement battery for the NiMh 2200mAh used on the Kyosho RC Surfer 4. This battery is slightly longer than the original, but fits no problem whatsoever.
Great upgrade. Nice battery!

Awesome value for the money

Not a Sub-C replacement

Why make a product that looks like a nickel stick pack, but doesn't fit where a Sub-C pack would? The cross section means it won't fit in a vehicle that has a hole for a stick pack to slide through (such as Tamiya Dual Hunter). Lesson learnt, hope others don't make the same mistake.

These are great batteries, use them in the little Tamiya M chassis and couple of bashers, fabulous value for the power and punch.

love it great for my rc racers

They are fantastic. Only gripe are the connectors. I use Deans, I had to change the connectors over. Other than that they have changed my life for the better. My life was in the dumps until I bought these. Thank you Hobbyking, you saved my life!!!!!!!!

This one fits every Tamiya I have and performs as expected

I bought these lipos, for a new Tamiya Comical, because of its round shape. However i came to the conclusion they didnt fit.
Dissapointed!