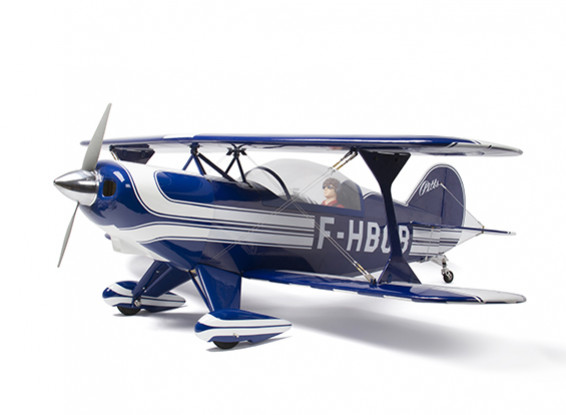 You will earn 229 bonus points for buying this item.

We are proud to announce our new line of super scale balsa aircraft for even the most discerning modeler. The Pitts Specials is the first in the line-up of kingcraft models that you'll hear more about in coming months.

Designed by the legendary Curtis Pitts, the Pitts Special has a proud history in aviation circles and is a favorite at an airshow. The prototype first flew in 1944 and although the aircraft has received refinements over time the current examples are still quite close to the original design. Pilots and aviation enthusiasts the world over have a soft spot for the Pitts Special, winning many aerobatic prizes and championships for its astonishing maneuverability and routines.

Kingcraft's almost ready to fly version of the Pitts Special is the S-2B, a later and more powerful twin-seater variant and a very recognizable airplane. Kingcraft have captured the true spirit of the Pitts with super scale detail coupled with a straightforward build.

All the hard work has been done for you, the airframe is a combination of balsa and light plywood construction with a painted fiberglass cowl, wheel pants and spats. It also has plywood inter-plane struts, aluminum landing gear and fairings with scale like working suspension. To bring this traditionally built ARF to the next level we have also included a set of rigging wires for the wings and empennage, a life-like pilot and ultra-scale dual cockpit with instrument panels which fully resemble that of the full-scale Pitts S-2B.

The manufacturing quality of the timber components is completed by hand with a high attention to detail, Design and flight testing is completed in house at Kingcraft to make sure the RC pilot has the best flying experience with their aerobatic powerhouse.

Embrace the performance and pull all the G's you desire with the Pitts Special S-2B from Kingcraft.

A kit which desserves to land in your hangar!

Wonderfull replica of the true model which I had the opportunity to watch during an airshow performing so good on aerobatics.
This scale model full of details has excellent flying characteristics. Simply flies like a Pitts but this model is far from the bad reputation which affected many scale model Pitts in similar size. Take-off, landings and sharp turns are not going to keep you sweat. Any average pilot already familiar with classic aerobatic model will enjoy this model.
Mine is fitted with a 5055 size brushless, running under 5S 5000mA lipo with 15 X 8 wood propeller. This is a perfect fit for this model in terms of performane and flight time.
Assembly requires to be cautious, but I would rate the difficulty as standard for this type of model. I just would have appreciated a more detailed assembly manual due to the many parts included in this kit.
A model which nobody will ignore at your airfield. The livery makes it the authentic F-HBOB which is really cool and which I would not have expected to find anywhere.
This a great model. Congratulation for proposing such a nice airplane.

Fabulous model but a few teething problems to be sorted out.

I have brought up a few little problems with Ian at HK forums and he said they will be looked at in due course. Thanks for that Ian. They were:
1. The wing servo cutouts are for 32g servos but none will fit because they are too deep for this wing, it really needs low profile ones.
2. Undercarriage legs won’t fit through their fairings without damaging lovely f/glass fairings.
3. Instructions are really not good enough for this complicated build. A lot of guesswork.
4. Wheel pants are set way too low and are sure to be written off on landing on grass.
5. Top wing supports damage the balsa and covering on the fuselage when bolted up. Trying to cut out the space for the supports without damaging such thin balsa is almost impossible.

Got this back in November , just opened it to start the build and NO INSTRUCTION!! I have been modeling since 68 yet reading through the reviews, I think I need them!
Help

Low profile servos would be great in the wings if they were available from HK.

So far my main beef has been the servo slots in the wings which are cut to a 32gm servo size, but the elev/rudder servo holes are for about 17gm servos. The larger wing servos I have, fit nicely into the holes but would bust out the other side of the wing if I hadn’t built them out by about 9mm on the trailing edge side. Hobbyking needs to be offering a low profile 32-34gm servo for the wings, but they don’t sell them at this stage. Also the wheel pants could do with being placed higher on the wheels so they don’t snag on grass. So far I’m happy with this latest Pitts and it looks great.

Very disappointing instructions considering the high scale quality of the aeroplane from the new HK entrant called Kingcraft. A little more care in this area would go a long way Hobbyking. I’d like to know if all the rigging struts are really necessary too. I know they look good and are very Scale, but they just add extra weight and make retrieval from trees almost impossible. The instructions don’t mention gluing the top wing's two halves together, maybe the rigging takes care of the top wing stability, don’t know. I’ll review some more when I’ve started the build. Any suggestions so far?

A beautiful plane let down by the poor instructions

The plane arrived quickly and was well packed. I downloaded the instruction manual which is where the problems started. The parts were not numbered and cross referenced in the instructions. The clarity of the pictures and the descriptions left a lot to be desired and I was often confused as to what went where. The position of the cut-outs for the control horns were not at all clear and I ended up fitting them in the wrong place. Two of the metal clevises supplied split in half when I tried to fit them so I had to buy more. I had ordered a lovely 70mm alum spinner as recommended but its adapter was too big for the motor shaft so I had to buy a 64mm one elsewhere. All in all a trying and frustrating build - just hope it flies better!

I bought this Pitts some weeks ago in the U.K. shop. Delivery takes just three days.
The overall quality is very good. But the building kit might be a challenge for beginners in building models. Especially because the manual has many detailed pictures, but the resolution isn't sufficient to see the details you need, when zooming in. If Hobbyking would provide a manual with higher resolution everything would be great.

Hobbyking says the spinner is 70mm but the manual calls for a 64mm spinner?What size are the main landing gear wheels?

Fantastic kit. Very well made with lots of details. I will fit it with a 120 four stroke engine.