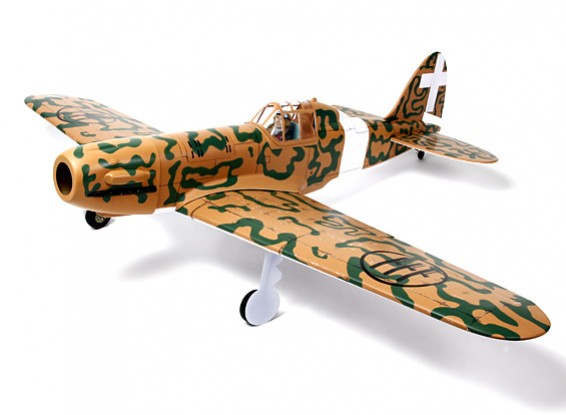 You will earn 134 bonus points for buying this item.

The Macchi C.205 also known as MC.205, "MC" standing for "Macchi Castoldi") Veltro was an Italian World War II fighter aircraft. Along with the Reggiane Re.2005 and Fiat G.55, the Macchi C.205 was one of the three "Serie 5" Italian fighters built around the powerful Daimler-Benz DB 605 engine. The C.205 was a development of the earlier C.202 Folgore. With a top speed of some 400 mph and equipped with a pair of 20 mm cannon as well as 12.7 mm Breda machine guns, the Macchi C.205 Veltro was highly respected by Allied and Luftwaffe pilots alike. Regarded as the best Italian aircraft of World War II in action it proved to be extremely effective, destroying a large number of Allied bombers and capable of successfully clashing on equal terms with such renowned fighters as the North American P-51D Mustang, a capability which encouraged the Luftwaffe to use a number of these aircraft to equip one Gruppe.

Our Macchi MC. 205 model comes almost ready to fly with just final assembly and equipment installation required. Modeled after the North African squadrons, this model is sure to attract attention at the field. The all balsa airframe is strong enough to take a nitro engine, yet is light enough for electric conversion. The forward fuselage has a magnetically secured hatch in it just for accessing things like your batteries or fuel tank. Rugged fixed tail dragger landing gear is great for rougher grass fields, though designed such that a set of retracts will drop right in. This model comes with a very complete hardware pack including pushrods, control horns, fuel tank, engine mount, and even a plastic spinner.

Flying the Macchi is much like any other warbird. Hold a little up elevator on the ground, then slowly relax it as you apply power and the tail starts to come up for a nice gentle take off. Rolls are just off axial as you would expect from a warbird. Bring it in low and fast, as it was meant to be. The printed graphics make the model pop in the air and on the ground. If you're looking for a warbird, but a change from all the Mustangs and Corsairs, the Macchi M.C. 205 Veltro is sure to tick all the right boxes.

this plane flies great,it is easy to assemble and it looks good to I cant believe how cheap it is if you are looking for a really well built model look at this one

I love this plane it is well priced good quality, it is great for the 52 2stroke . this plane has to be one of the most stable and rock solid war birds i have from hk. I highly recommend it
Its so nice to fly even as your 1st low wing . very happy

My Macchi came well packed&protected.
Weight of all parts in the box totals 2.300g. The hardware pack, push roads and the cowl alone put 850g on the scale. It might be possible to save some weight here later while putting the model together.
On the picture above, one of the ABS tail fairings is missing but it's included in the box.
All in all a nice looking model.
I have an ASP 91FS in the box. From my experience with other VQ models (the Macchi is made by VQ Models), I wouldn't recommend the ASP 52FS or 61FS. Also, I strongly recommend adding flaps. Wished, VQ had already done that in the factory. Labour costs are very low in Vietnam. For an extra Dollar, they would have done a great favour.

This is unbelievably good value for the money, the covering is great and they also give you some patches for repearing holes or splits it also every little thing has been taken into consideration. Mybe not for the beginner but for your 2nd model it is ideal, definitely worthy of the airfield

Great model, reasonably scale, film coating and realistic decals.
Asp 61 fs fitted to optimize the weights and flies very well, not too fast
Beware of products to clean your model, remove some color from the film.
I also own mig 3 and soon take ki61 yen

Not a bad kit for scale flying. Made with love in Vietnam. For a small nitro engine or electric motor on 4s is an appropriate airframe. Requires more than usual work to assemble together although. It's all balsa, self-sticking film and decorative plastic parts.
If you plan using this for a high power setup - look for something else. Wing has no spar and 6s battery won't fit without modifications. The same company makes Mig3 and Yak9/52 which differ only in film cover, fins and plastic parts.

Have now flown set up as per instructions. Excellent flight characteristics very stable no bad tendencies. Using a modified NGH9cc which supply's scale like power suggest a 4stroke 70 would give best performance. landings a breeze

Nice kit comes with metal clevises and the top hatch is perfectly positioned for electric. Have installed HKD514 retracts which fit perfectly. Not flown yet as waiting on motor. Only thing not happy with is the wing fitment is not quite flush with the fuselage.