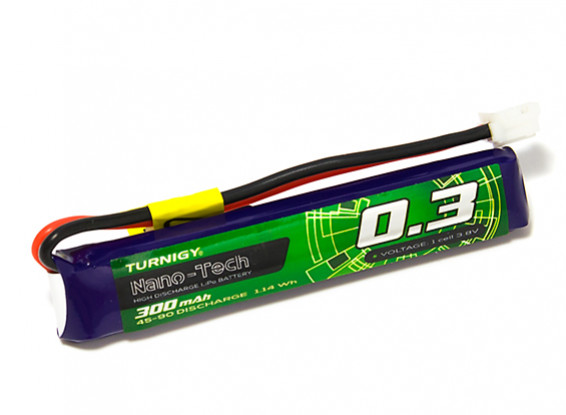 Used for mobular 6 quad.
Best ive found on the market. Tried loads of other cheeper alternatives.

Batteries arrived in good order, packaging 5 thumbs up there,
flight time is around 4-5minutes with 1x1s and not much more using 2x1s batteries on my novice race quad, charge time was acceptable, good product value for money

I have almost 30 nanotech 200mah 1s 35-70c and these batteries are perfect(I have modified them with Ph2.0).
And I said let's try nanotech 300mah 1s 45-90c)(bought 2)
I thought, these batteries will be perfect because discharge rate is bigger, battery is bigger in mah and new one, but NO.
flight time with my mobula6 is almost 2.30min and at the end of the flight my mob6 is shutting off
(200mah lipo are, 3 min my old lipo's and newest are 3.30min and never shut off

I bought these for grandkids to motorize their (Guillows) rubber band powered model airplanes. These batteries at 45C could lift a Spruce Goose I suspect.

I love those batteries. Great punch. Fly better than originals on my mobula. Only cons they are a bit heavier.

Powerfull lipo for my TinyWhoop