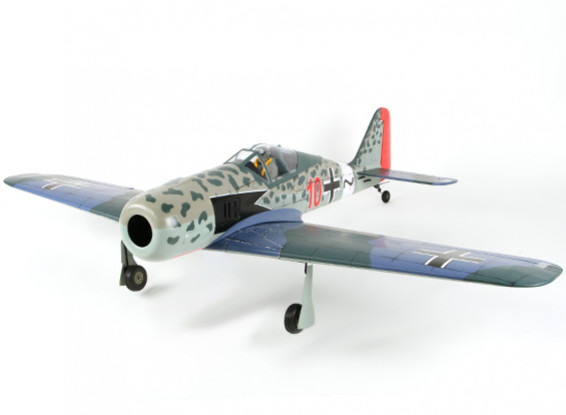 You will earn 126 bonus points for buying this item.

It would be fair to say that the Focke Wulf FW-190 came as a shock to Allied pilots when introduced into service in August 1941; indeed, British ace Douglas Bader wrote as much in his book "Fight for the Sky."

Heavily armed with 4 x 20mm cannons and 2 x 13mm machine guns, the "Butcher Bird" as the FW-190A was known, delivered a massive punch to those falling within its sights and outclassed the Spitfire Vb (the main British fighter at that time) in all areas except turn radius at altitudes below 20,000 ft.

With a top speed of 408 mph at 19,400ft and a rate of climb of nearly 3,000ft/min the FW-190A maintained its superiority over Allied fighters until the introduction of the Spitfire Mk IX with its more powerful Merlin 61 engine and 2 stage supercharger restored the balance in the summer of 1942.
The FW-190 saw action on the Eastern Front from late 1942, where it found favour with its pilots who used it in both fighter and ground attack roles.

Our "Butcher Bird" comes almost ready to fly with just final assembly and equipment installation required. The all balsa airframe is strong enough to take a nitro engine, yet is light enough for electric conversion. Rugged fixed tail dragger landing gear is great for rougher grass fields, although it is a simple job to add a set of retracts. This model comes with a very complete hardware pack including pushrods, control horns, fuel tank, engine mount, and even a plastic spinner.

To add to the scale realism, the covering is a multi color plastic film, semi matt finish with printed panel line, rivet details and even realistic weathering effects applied! A spacious, pre-painted fiberglass cowl is supplied to finish off this great-looking sport/scale model and a large, but well disguised access hatch allows fast battery changes in between sorties.

Flying the FW-190 is a pleasure thanks to its light wing loading and refined wing section that has been developed to give milder stall characteristics that is often found with scale warbirds and make it a simple job to drop in a set of retracts to clean it up for some adrenaline pumping low and fast strafing runs, pulling up into a victory roll at the end of the field.

I have had this kit (although its an ARF it needs quite a bit of work before it can fly) for a few weeks and am well into the setup. Initial impressions are really good - very well and strongly made (if a bit heavy) with printed plastic covering. The pilot and cockpit are excellent. It comes with a comprehensive set of a accessories - all the pushrods, hinges, servo mounts etc. I am doing mine electric and I reckon all up weight will be about 2.7kg (I weighed all the components). It took a while to get retracts that will fit but have eventually settled on electric retracts with a socket for 5mm pins and have cut down the supplied fixed u/c legs and put a tube sleeve around the end that fits in the retract as the wire is 4mm diameter. I also hope to install a hobby king sound system in this plane. The battery bay is big enough for a 5s 3000mAh battery but not my 5000mAh ones so I hope flight duration will not be a problem. I will add to this review once it flies.

I am starting this thread because I just received my FW-190.
Good packaging arrived in one piece.
Model is covered in some plastic covering (I think its called KH Misticker). Mat finish and beautifully detailed.
I am planning to put EVO10 gas on this model. I used EVO10 engine on WorldModels FW190 and it works perfectly.

Over the course of several weeks I will continue to post pics and finally video...stay tuned

OK ... kit arrived in very good condition ... double boxed. Its the VQ FW kit.
All goes together well ... BUT - the firewall marks are difficult to find, and motor mount once fitted as per instructions - shaft end is out of centre. The mount needs to be moved a small amount more to left so that right thrust angle puts shaft end at centre.
Cowl does not slide over fuselage end and only butts up to it.
Fixed wheel blocks are laminated from multiple ply sheets and these split apart when landing or any shock. The L of the landing gear then impacts wing top sheeting.
The wing is non-scale as most of the aircraft but overall it looks the part in the air. The photo of her gives impression of a semi gloss finish but in fact she is much better looking in reality.
The covering film is not like normal film - it is more self-adhesive and thicker. They give you A4 sheets of each colour as spare repair film if needed.

I have fitted an OS 70FL 4str and this powers the model excellently, along with 12x6 prop. Balance is spot on with this.
I am now awaiting the retracts to replace the fixed gear. I chose the plain retract units shown in accs. links and will use the fixed gear in them with top L cut of.

For anyone who wants a FW190 and not too worried about scale accuracy - this is a good model.

I ordered one, the aircraft is well done and i like the colors and the age effect on the wing skin. The push pull rods are metallic so too havy for my point of view. I think i will replace them with a plastic cable to save same weith.

My FW-190 came well packed & protected. Weight of all parts in the box totals 2.270g. The hardware pack and push roads alone put 760g on the scale. It might be possible to save some weight here later while putting the model together.

Very nice all wood constructing even fuselage is round like the original. Plane is stand off scale, but one of the best flying FW-190's I have ever owned. Flying with a 4250-750 brushless motor 14x7 APC e prop and 5000 4 cell Hobby King Zippy pack lipo. 9 minute flights depending on throttle management. Installed retracts had to modified the battery opening a little for the larger pack. Same VQ model FW-190 from a few years back see Model Airplane new reviews. http://www.modelairplanenews.com/blog/2012/12/12/vq-models-focke-wulf-fw-190-video/

Just received the plane and it is a great looking bird with many nice details. Much better looking than shown on the pictures here, Fantastic value for the money, even when you add the shipping cost. It is a VQ model and has a very good manual. All parts like motor mount are top quality. I bought the servoless retracts with shock absorbing oleo legs - fits very well. Came with 4 guns but only one is needed to fit on top of cowling - not shown on the pictures here. I am sure it will fly very well - only pity it does not have flaps