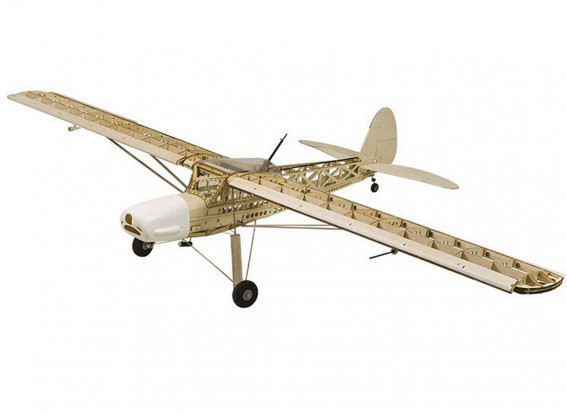 You will earn 95 bonus points for buying this item.

Foam model aircraft are great if you want to get flying quickly, but after a while tends to all fly and assemble the same way, and it could be said lack a certain sense of achievement. So why not experience the thrill and satisfaction of building your very own model from a kit of parts, covering it in your own unique color scheme, and watching it fly successfully for the very first time.

H-King has made this much easier for you with their range of laser cut kits. For ease of construction, all the wooden parts are beautifully laser cut so you can build the perfect model. The laser cutting is so accurate that the parts fit very snugly together allowing them to hold in place whilst you run a good CA glue around the joints.

The subject of this kit is the German liaison aircraft built during WW2, the Fieseler Fi 156 Storch. The Storch (German for "Stork") is famous for its STOL (Short Take-Off and Landing) abilities and it had an incredibly low stall speed of only 31mph (miles per hour). It was mainly used during WW2 for reconnaissance, spotting for the army and forward operations, and medical evacuation. Its design incorporated hinged slats along the entire length of the wings leading edge and a hinged and slotted set of control surfaces ran along each trailing edge, this was split equally to form outboard ailerons and inboard flaps. Virtually nothing about the Storch is streamlined with bits sticking out everywhere including the side windows, this with its long undercarriage hanging down gives it a unique long-legged bird look which is why it was given the name of "Storch".

This kit is an updated version of an earlier version. The improvements over the original are improved undercarriage and strut attachments, improved pushrod system, 3 layer tailplane construction for added strength, and improved scale detail. This model captures the very essence of the Fieseler Fi 156 Storch with its solid yet lightweight framework structure as per the full-size aircraft but is built from balsa and hardwoods and includes a molded plastic cowl and rear screen. Also supplied are a pair of scale aircraft wheels, carbon tube wing spars, and joiners plus a comprehensive hardware pack that includes nuts, bolts, control horns, rods, and connectors, etc.

The Fieseler Storch has been designed to use a 28mm brushless outrunner motor with 300~400 watts of power or it can be modified to take an equivalent nitro engine. The leading edge slats can be fixed for a simpler set up or they can be working with a servo on each. The flaps also could be fixed for a simpler set up but this model comes into its own with working flaps. So if you have working slats and flaps plus the ailerons you will require 6 x 9~10g micro servos for the wings then 2 x 9~10g or similar for the rudder and elevator.

Overall this is a fantastic kit and due to its ease of construction, it is perfect for the seasoned builder or those with limited building experience. Once finished in an authentic color scheme, and with the addition of scale accessories such as a pilot and instrument panel, this scale looking Fieseler Storch will look the part and turn heads when performing low, slow passes and STOL take-offs and landings at your local flying field.

Please note: There is a copy of the building manual under the "Files" tab.

So overall a great model for a great price and a fun build. The directions however really need to be revamped and more of a user friendly layout. Some directions had missing information or a helpful picture. Some parts were not even mention or show. In the either the direction book or full size plans. A few more close ups of some assembled parts would be helpful. I realize the model has been altered and redone, but it would have been nice if they updated the plans along with the model. I enjoyed this model

Well packed kit of parts, in most cases with clear markings to indicate where parts are to go. A very complete inclusion of most parts to finish the model, with a relatively comprehensive well illustrated construction manual which can be a bit ambiguous at times, but should not be a problem for experienced constructors.
In summary, a very well designed kit, and excellent value.

This was one of the most challenging builds I've ever had--Instructions are a joke thought this kit came from IKEA lots of pictures -- it's not for the faint of heart but the end result is worth it. But if this is your first kit your going to be in trouble. I'm a experienced builder and this build challenged me at every step. A good set of instructions would be extremely helpful.

This was one of the most challenging builds I've ever had--Instructions are a joke thought this kit came from IKEA lots of pictures -- it's not for the faint of heart but the end result is worth it. But if this is your first kit your going to be in trouble. I'm a experienced builder and this build challenged me at every step. A good set of instructions would be extremely helpful.

i have building for along time from plans and my own design.

the kit is very accuratly cut and just slots together, when you can finally identify the parts from the very clutterd photographs and breif instructions. but it is well worth the money and great quality.

the badges are missing in the boxes.

Overall everything is good, the badges are missing in the boxes. DWH does not provide the badges in the boxes, which is a shame and to find them good luck, or you have to buy them from DWh Aliexpress at 65 dollars.

Enjoy to build, a few small issues. The plans have no written instructions so you must study the pictures very carefully.

It has been a joy to build this model.
So far I am at the stage of building the left wing.
However, there appears to be a problem.
Where the leading edges W9 and W9-1 meet
ribs W0 and W1,there appears to be a conflict with the rib W0.
I would be grateful if you could clarify this for me.

I like the kit. The parts fit well and labelled clearly.

If you are a newcomer to kit building this is a bit daunting for there are so many parts and few instructiions. must have a keen eye in analyzing the picturesg and some experience in building a kit.