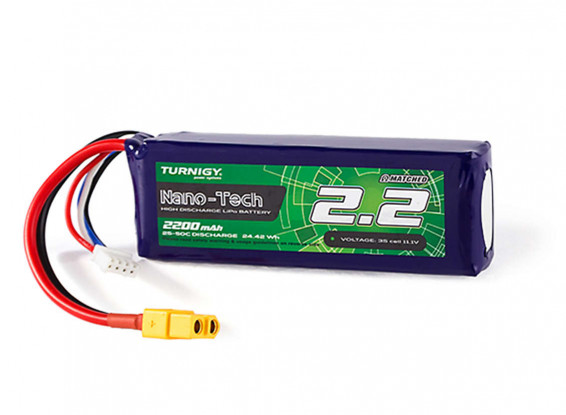 You will earn 15 bonus points for buying this item.

More than just a fancy name. TURNIGY nano-tech Lipoly batteries were designed from the ground up with serious performance in mind. Utilising an advanced LiCo nano-technology substrate that allows electrons to pass more freely from anode to cathode with less internal impedance. In short; less voltage sag and higher discharge rates than a similar density lithium polymer (non nano-tech) batteries.

Perfect for the moment

After 5 loads everything ok

A Bit Lighter But Very Strong

These have enough staying power that I've not yet run one down below 40% charge. Punch is still solid and immediate at that point -- there's no noticed fade from start to end of my flights. So far, no problems at all.

Lighter But Plenty Of Punch

Not superlight, but weigh less than the typical 2200 3S. Even so, well into the flight I'm still seeing very strong punch out of these batteries, even pumping near capacity. Getting longer flights, too. Can't say about longevity since I'm only five flights in.