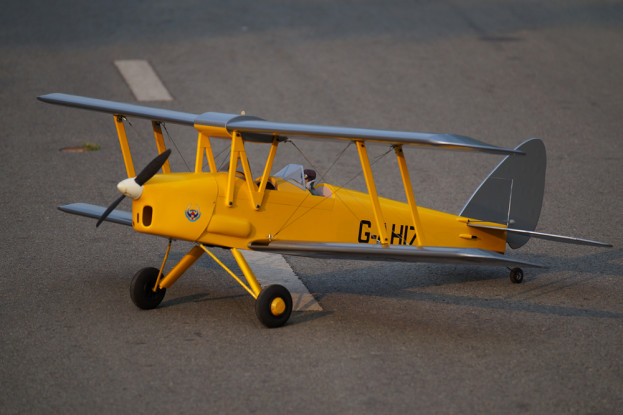 You will earn 135 bonus points for buying this item.

This is a beautiful rendition of an old favorite and is based on one of the Cambridge Flying Groups de Havilland DH82a Tiger Moth aircraft. The original aircraft was built in 1944. It comes in the yellow and silver livery of the London Aero Club. This model is made of balsa and can be powered by either glow or electric.

The de Havilland DH.82 Tiger moth was designed by Geoffrey de Havilland in the 1930s. It was operated by the Royal Air Force and many other air forces as a two-seat primary trainer before and during World War II. It has been used all other the world with many examples still flying.

As well as determining the power type this model also requires some assembly as well as fitting of the motor/engine and other electronics. It is recommended to use a 750W electric motor or a .46 2 Stroke or .70 4 Stroke engine. It will require 4 servos for electric or 5 servos for gas setup.

The Tiger Moth is a superb flier and gives a distinguished presence in the air. A must for every hangar.

Note: Manual can be found in the "Files" tab above.

One of, if not the best ARF wood plane kit from HobbyKing

I bought this plane more than a year ago and maiden it only today mainly because it took time to improve and waiting for good weather. For a classic plane like TM, one must use glow engine to preserve the charm. The power plant used was OS 56a four stroke pushing a JM 11X7 prop.
The improvements made were mainly modifications to reduce weight at the tail end of the plane. Nylon pushrods in plastic tubes were used to replace the iron wires. Elevator and rudder servos were installed as much forward as space allowed. Mini servo was used for throttle. CG was balanced at the suggested location after gluing about 70 gram of lead to the front of the cowling!
The plane flew very scale like with the 56 engine. Aileron control is adequate but don't expect 4 point axial rolls. All in all I was very pleased with it. Hope Hobbyking will provide more choices for traditional balsa wood planes like this one.

My last point of view.

As promised in my previous comment, today I flew my Tiger Moth for the first time. It has flown perfectly and without the need for any correction. Which means that the model is well designed and if all the assembly instructions are followed, a perfect flight is guaranteed. I rode, as I said, an OS 4T 95 and this has meant that I have not had to put even a gram to get a perfect CG. I have flown with a full engine and it can handle the effort well. At half throttle, it does all the acrobatic maneuvers that the real model would. At 40% power it flies perfectly slow to scale. Take off in 10 meters and land as slow as you want, which favors its integrity. Simply put, a very affordable kit for price that offers great quality and is fun to assemble. (As always, translated by Google, Thanks)

Only just ARF, would take most builders around 5 hours. Only niggles: no wing dowels in kit; wheels & rear control horns need replacing; undercarriage fixings need upgrading. I am happy with the end result.

Awefull PVC covering slackens off and looks like a stewed prune even after minor exposure to the sun. Undercarriage not nearly strong enough - goes SPLAT even after smooth landings.

Appearance generally good but I wish they'd use proper heat-shrink covering instead of that lousy PVC stuff. It slackens off and looks like a stewed prune after even moderate exposure to the sun. The undercarriage isn't nearly strong enough - it goes SPLAT after even the gentlest landings. Also the fibreglass fairings break very easily. I altered the undercarriage to make it more like the full size and this had the effect of masking it stronger. Flying performance is OK - but it looks scale-like.

I recently bought this model airplane. When I bought it, due to its low price, I was not going to be surprised that I found the day it came into my hands. I was pleasantly surprised by the quality of the set. It took me more hours to set up than the "epo" so fashionable usually wear. It was worth it because I was left with a perfect looking model. I did a first assembly with a 50 4T engine. When I had it finished and with a weight of 3,600 grams, I was not convinced that I had to follow the balance by adding 400 grams of lead to the nose. I reconsidered and decided to trade dead weight for a heavier engine. I decided on a 95 4T. Perfect! I was right with the choice regarding weight; now it also weighs 3,600 gms but without any lead! Probably the model will have excess motorization but this defect will be corrected by not pushing the lever too far forward. That is, it will fly well at half throttle. I hope to finish it before the end of August. When I do, I will tell you about my flight impressions. For now I am satisfied by saying that I consider this Tiger Moth one of the models that has given me the most satisfaction throughout the assembly and tuning process.

I had high hopes for this airplane when I ordered it. I deceided on buildin the electric version using Eflite Power 52 motor with Eflite 80 amp ECS using 6 cell lipo for power. Build went smooth, stright forward and the instructions were well written. Upon the first flight, I have three complaints with this model. First, the main landing gear is junk. As I was getting ready for take-off the landing gear collasped half-way down the runway causing siginificant dmage to the cowel and covering material. Which leads to issue number two - the covering is a self-stick type that is not very durable. Lucky they supply a sheet of the yellow and grey for repairs. When the model flipped on take-off the resulting debirs punctured several holes in the covering. The third complaint is lack of replacement parts. I contacted customer service at Hobby King for suport to purchase a new cowl and was told there are no replacement parts available for this model. So, if you break something, hope you are handy at doing repairs from scratch, or throw the model in the trash. As a final note, once I fabricated new landing gear that can handle the weight of the aircraft and repaired the cowl as good as I could, the plane finally took to the air. After trimming, the plane flew great. I have several flights on it now.

This is an excellent plane. Good instructions and goes together well. Quality is high and all parts there. Flying is a pleasure. Like a trainer in low. Loops, rolls and inverted with little effort. One of my facorite go to planes for flying.