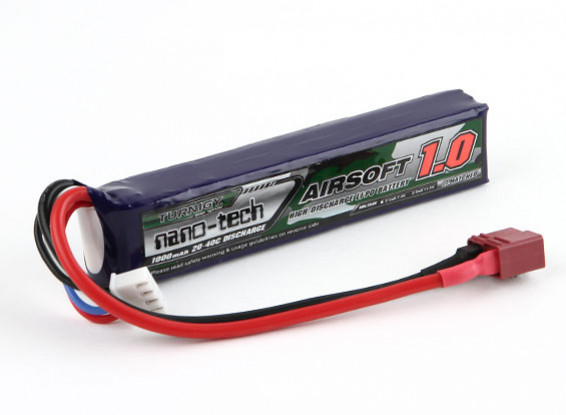 It's clear why Turnigy Nano-techs are the go to pack for anyone who is serious about Airsoft.

So I bought these batteries since they are smaller than the other batteries I have previously purchased. I bought two of them but for some reason, one doesn't charge or give out power at all.

Awesome battery, quick trigger response and rate of fire on my ICS m4 !
I can only recommend this battery, this thing is small but packs a punch!

Bought specifically for the Krytac series airsoft gun with the mini buffer tube stock. But I also go lucky and it fit my electric blowback M4 with an even smaller stock setup. T-connector also saved me time and effort. Can't recommend enough for those special case airsoft rifles.

A good quality battery that is the perfect combination of small size and long life. And the are sold at a better price than anywhere else.

In one Word great!!
Small but powerful lasts 1/2 day airsofting and they are plug and play so no cutting off the tamia and replacing it with deans normal charge 2hours and fast charge 1 hour so not too bad.

Exactly what I needed

this battery works great for airsoft

perfect fit in small fuselage, especially in my FXj 2.5