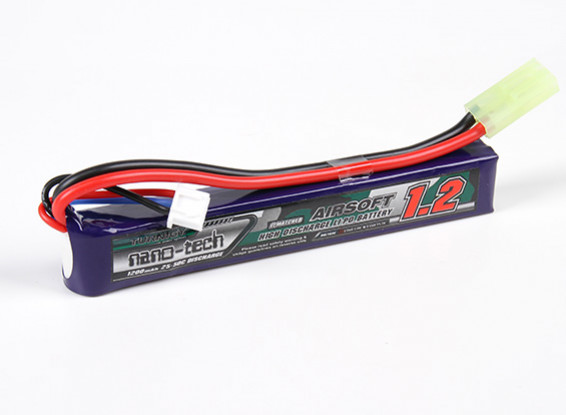 1) The nanometer conductive additives form ultrastrong electron-conducting networks in the electrodes which can increase electronic conductivity.
2) These additives create a superstrong ability for imbibition in the carrier liquid to supply more ion channels. This improves the ability of ion transmission and ion diffusion.Through improving electronic conductivity and ion transmission, the impedance is reduced and the polarization of high rate discharge decreases greatly.

Nothing bad about it !

Nothing bad to say about order and product !

Even with a 2.4A(2C) discharge, the battery gives just 980 mAh and this is only 82% of the declared capacity, less than many other Turnigy battery.
If I buy a battery for discharge 25C, I am not interested in its capacity when discharging 1A.

Always a great battery for airsoft, and this product can be use in a MP5k ;-)

The goods of high quality, in mp5k enter normally. Came "storages" are able. I didn't find defects. One afflicted, it is delivery. Instead of receiving in a place of delivery of mailings. To me a box slightly into a mailbox didn't thrust, the benefit the box didn't get, and it was necessary to receive on mail. And differently I think I would lose these .