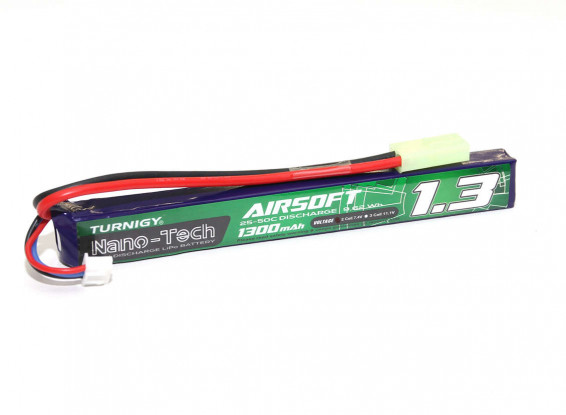 When it comes to putting rounds down range, no one wants to compromise on firepower! that's why the legendary Turnigy Nano-Tech batteries are now available for Airsoft combat. Higher motor RPM, less voltage sag, and extended operating times equal better performance from your weapon of choice.

The nano-core technology in lithium-ion batteries is the application of nanometer conductive additives.

Good batteries for my airsoft gun. Great service!
Thanks!!!

Fits into Marui MP5K receiver in lieu of a NI 7 elements battery, which is the reason why I bought it !
Fits into SIG 550 front hand guard (Originally NI 8 elements battery, so not a surprise)
Fits into M4 tube but will not allow the crane to retract fully, due to the length of the battery

Great value for the price.

A very good battery. works perfectly and even fits the ak-47 tactical with the folding stok. so it fits perfectly under the receaver cover

The excellent battery of the correct size. Perfectly gives a current at small fall of pressure

I'm using this battery in Poland for about one year. Its great, Rate of Fire is exellent. Next time I will be lookin for small stick - i will pick this one!

Hi, I bought this battery few weeks ago. I know that it is not a long time, but I think that it is a very good battery. It lasts quite a long time, no problems with charging yet, nice rate of fire and - and this is very important for me - it is quite small. I can use it as normal 8,4V 1100 mAh Ni-Mh stick type battery in all my AKs (TM AK-47, CM. 028A, CM.035A and Dboys RK-01) with no problems. Guns have mostly stock internals (only TM is upgraded with Guarder SP 120 spring), only greased, shimmed etc and ROF is pretty good. It is an excellent value for the price. I can highly recommend it over all Ni-mh stick batteries. Only I thing - it comes with small tamyia connector, I recommend to change it for T-deans.