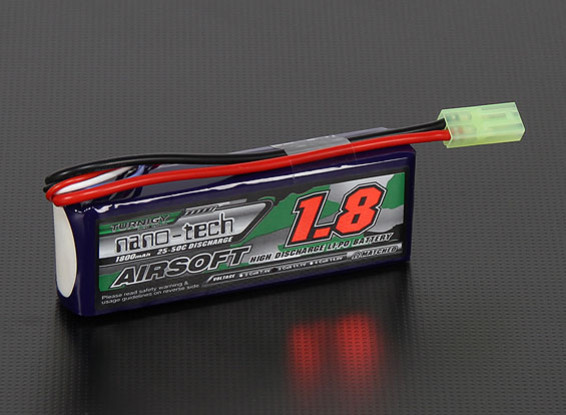 *Note: The length of Balance charging wire may vary

This is my second one and I am obviously satisfied.

Battery is awesome and durable. Had one fall from plane while inverted, fell at least 30ft and was lost for a couple weeks. Found battery with next to no damage, charged it up and been using for months

This is the BEST mini 250mm quad class battery I've ever used! Running 2300kv motors and the pack still comes down just a bit warm to the touch, but it really puts out the power. This is really the minimum pack needed for 4x2300kv motors. Gives me a full 9-10min of balls out power and probably a good 15minplus of hover but who hovers.

Perfect battery, i use it in my Dboy Mk12 Mod1, now I haver really fast trigger response!

Apart from the tamiya connector, it's the same as other Nano tech

Very good and powerfull.Size is the same as Flightmax 1800 mah. but has more power and stays colder. Weight = 138 gr. with Dean-plug. those batteries, much colder than other lipos after a flight.

Very compact and powerfull.Size is less than my previous 1800 mah Lipos : 103x34x19.After changing the plug for a Tplug i used them on a 1.1m Extra 330 and on a microshowflyer. Both are happy with those batteries, much colder than other lipos after a flight.

Does not fit the 1/16 e-revo battery bay. Tried modding the doors and cutting a little from the chasis. Mine were a little bigger then stated. I asume all are as well. Bummer.